Though built for multi purposes, the original parish building is now used entirely for the school and hall.  But there is evidence of former uses.  The office located on the top floor of the bell tower was once the office of the sister principal.  A hole in the ceiling is where the rope for the bell in the tower once hung.  There is a window that is now plastered over in the hall but the evidence of which is still seen in this office by way of a sliding door that sister once used to keep an eye on her students during Mass.

In the basement under a set of stairs is an abandoned vault.  Here was kept the parish valuables when this building also housed the church, hall, and offices.  In the library is still seen an elevated area that served as the stage from when this floor was the church hall.

On the second floor is a large classroom that housed the nuns.  The girls bathroom is larger and slightly more ornate than any others in the building.  This served as the communal bathroom for the religious faculty who lived there. 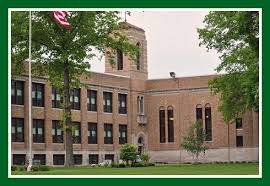 On the front lawn of the school is the original parish bell.  Typically, Catholic steeple bells are given a name and are “baptized” before use.  In the Roman Catholic Church the name Baptism of Bells has been given to the ceremonial blessing of church bells since the eleventh century. The name given this bell is Annunciata.  It was caste by the Stuckstede & Bro. Co. and dedicated in November of 1929.  According to online sources this foundry operated in Saint Louis, Missouri, from 1890 to 1940, and intermittently thereafter until 1961.  At least 90 bells from this foundry (mostly single but some in peals of two or three) remain in the Saint Louis region.  This was the second largest and second longest-lasting of several bell foundries in this city.  At some point. during repairs to the tower, the bell was removed and placed on the school grounds, but is still very much in working order.
Posted by Fr. V at 6:33:00 AM

Dang. An empty vault you could've used to keep a supply of Valu-Time Cheese Curls in.