Over the main entrance of the old church is the original version of the parish coat of arms.  Heraldry is of serious matter and, according to James-Charles Noonan’s book, “The Church Visible,” “it is a phenomenon very much a part of the legal and social structures of practically every continent on earth. . . Heraldry is not independent of the law and is, in fact, strictly governed by international custom and state law. . . Ecclesiastical heraldry is not determined by heraldic considerations alone but also by doctrinal, liturgical, and canonical factors.”

The heraldry of St. Sebastian has an “escutcheon” or shield “per pale” or divided down the center.  “In sinister” or to the left as you view the arms are seven crossletes of “vert” (or green) on an “or” (or gold) field.  The crosses are an obvious reference to Christianity and that there are seven of them points to one of the main purposes of the parish which is to celebrate the seven sacraments.

“In dexter” or to the right, we have three upward pointing arrows in “or” on a “vert” field.  The three arrows have a double meaning.  The first is in reference to the Trinity as there are three of them pointing to heaven.  The second concerns the story of our patron, St. Sebastian, who is most famously pictured riddled with arrows when the emperor Diocletian attempted to have him put to death for being a Christian. 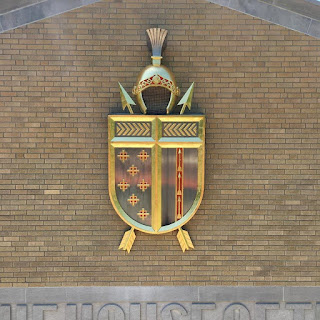 At some point in the 1950s, the coat of arms went through a redesign.  A chief was added with arrow like lines pointing toward the center.  Though the original coat of arms appears on the convent which was completed in 1951, this new version made its appearance on the Recreation Center (later to be known as Byrider Hall) in 1953.  There is a little debate concerning what these  lines mean.  Some think that they are the chevrons of rank of someone serving in the armed forces and so attribute them to St. Sebastian's status as a high ranking officer in the Praetorian Guard.  But this would be completely anachronistic.  It is more likely a highly symbolic depiction of palm branches which would be the Church’s symbol of triumph over death for her martyrs.  This version of the coat of arms continued to be employed through the construction of the “new” church as can be seen on the building, the doors, and the pews. 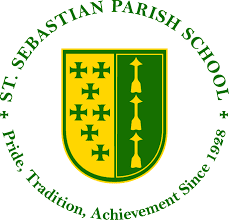 Around the year 2009, finding many versions of the coat of arms in use at the parish, from what was found on the buildings, various letterheads, uniforms, signs, and other such uses, a concerted effort was made to focus on just one version of the arms and standardize the colors, fonts, and uses of the arms across the entire parish.  Though remnants of various versions may still be found, all new employments of the arms have since been strictly regulated.  This final version returns to the original version and has removed instruments of war such as helmets and pikes, which are strictly forbidden in ecclesiastical heraldry.
Posted by Fr. V at 6:16:00 AM