FRIDAY POTPOURRI: PARISH HISTORY: A CATHOLIC AND A SCOUT

The Boy Scouts was a relatively new organization at this time having been founded in 1910. But 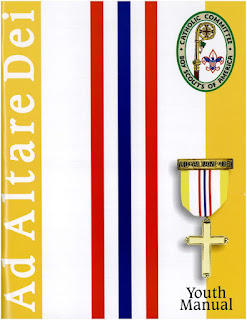 even more recent was the institution of a Boy Scout badge specifically for Catholic scouts.  Sensing a need for more spiritual development in the Scouting program, the Rev. James E. Dolan created the Ad Altare Dei program in 1926.   The aim of the first program Fr. Dolan developed was to recognize those First Class Scouts who had served "with loyalty and fidelity" as altar boys during their tenure as Scouts. He named the program Ad Altare Dei and created the Ad Altare Dei Cross as it's emblem. The English translation of the name means: "to the Altar of God."  The first emblems were presented nationwide in 1941.  The aim of the program was "an attempt to teach and inculcate a Catholic way of living through the Scouting program." The first set of requirements stated the Scout had to be at least First Class, a member of a registered Troop of the Boy Scouts of America, a resident within the diocese, and had served at the altar in any capacity for 250 hours. To be eligible for the emblem, the Scout had to demonstrate his ability to make all responses in Latin. The Scout's Pastor had to certify also that the Scout was worthy to receive the emblem because of his punctuality, fitness, decorum on the altar, and devotion.

1946 would mark the first time any Scout in Akron would receive this medal.  Across the city, twelve scouts earned this medal.  Of the the twelve, six were from St. Sebastian.

What are the names of the scouts that received the awards?

Signed, an anonymous somebody
(As mentioned in TUESDAY QUOTE OF THE WEEK CCCLXXVIII)