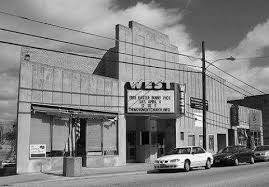 Monday was the last day of Christmas as it is recognized in the Catholic Church, as opposed to the St. Walmart the Great calendar.  In regards to this, it is the goal of this parish to operate in much the same way the West Movie Theater was run when I was a kid.  During the last showing of a movie on Thursday night, the exterior of the theater was transformed so that no trace was left of that old movie!  Its now about the next movie!  So the marque was changed, the posters were changed, displays - as the people walked out of the movie everything was geared toward the most current. 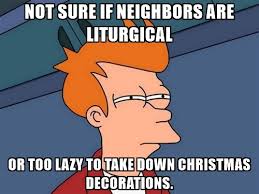 When Christmas came to a close at the parish, it pretty much vanished (except for a forgotten star still hanging where the manger was and the parts of the outdoor manger scene that were iced to the ground.)  I wanted it to be startling and clear that we are back in ordinary time.  That means giving the poinsettias up for adoption.

I know some parishes keep their poinsettias up sometimes for months.  They are flowers and they are pretty no matter the strong connotation they have with Christmas.  So there is nothing “wrong” with leaving them up.  But when I do see them at other parishes I don’t think, “Look at the pretty flowers,” I think, “Those are left over from Christmas.” 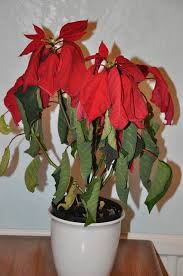 I will grant you that I am a bit sensitive to symbolism but does it not help the celebration of the liturgical calendar to be just a tad overboard on these things?  If you went to the mall today and saw Christmas decorations (as opposed to St. Valentine’s Day decorations) would you not just think, “Somebody is not on the ball.  Time to take those down.”  Or if you neighbor had their Christmas lights still up (until July) would you not think, “Come on!  You’re bringing my property values down!”  But maybe in church people see the Christmas flowers and think, “Ah!  The long lingering glow of Christmas.”  I see coloring outside the lines.
Posted by Fr. V at 6:12:00 AM

That's why Monday is poinsettia adoption day on the unofficial liturgical calendar.

I very much agree. We have a tendency to stop seeing things. Things become routine and normal. We should be careful not to let that happen with the visual reminders of Christmas.

The “waste not” attitude is admirable but there is nothing wrong with deeming some things a treat only for a special time of year.