TUESDAY QUOTE OF THE WEEK CDXIX

FINDING TRUTH WHEREVER IT MAY BE FOUND:  "Reincarnation is not really a mystical idea . . . Reincarnation need only extend experiences in the sense of repeating them.  It is no more transcendental for a man to remember what he did in Babylon before he was born than to remember what he did in Brixton before he had a knock on the head."  from G. K. Chesterton's, "Everlasting Man"

I did not think I would be posting to you today but my flight was cancelled and I am sitting here in the airport for 5 hours.  Yuck.

Of course nobody sent in anything this week but here is some news just the same:

St. Bernard Parish had the dedication of their rebuilt pipe organ.  It was a glorious affair!  The church was PACKED.  Fr. Reed, the pastor, graciously allowed Fr. Simone and me to sit in the sanctuary.  The Director of Music at St. Sebastian, Lynn Steward, was the guest organist and put the organ through its paces. 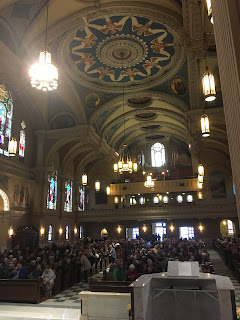 This is Fr. Reed blessing the rebuilt Schantz organ: 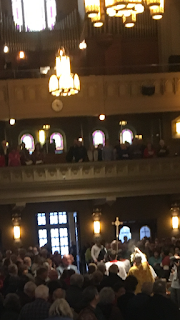 My class was ordained on the feast of St. Joan of Arc.  My classmate has a little statue of her and I wanted one like it to begin developing my relationship with this saint a little better.  I found something I liked on Etsy though it was a little more than I wanted to pay.  But I've waited almost two decades to find something I liked and thought I better just go ahead and dive in.  Unfortunately this 104 year old statue from France arrived heavily damaged. 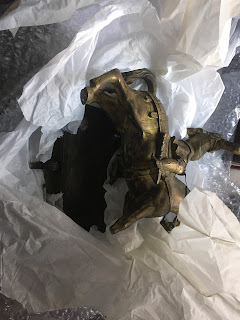 The person selling it was sad and very understanding and we worked out a deal that slashed the original purchase price.  Now it is matter of a lot of glue and patience.  Perhaps she already worked her first favor me.  I no longer feel like I spent to much money!

Here is a new Theology on Tap Akron: 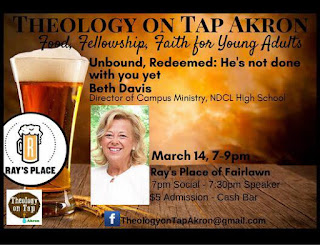 Here is a vide about contemporary art that is not the usual diatribe.  I don't think it redeems the current situation but it does help me understand it a lot better.  I hope you get something out of it.

Father,
If you are in need of someone to restore the damaged statue of St. Joan, I may be able to recommend someone here in Akron. She typically works in more ancient art restoration, but may be well suited to address your statue.
Sarah