FRIDAY POTPOURRI: WHAT DOES THIS COUNCIL ACTUALLY SAY? 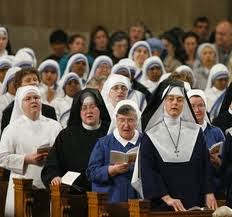 Vatican II is often misunderstood.  Actually that is not true.  In truth, Vatican II is often unknown particularly by its biggest proponents.  As mentioned here before on several occasions, people will often claim to be acting in the spirit of VII even when their actions are in direct contradiction to the council.
Another symptom of this reared its ugly head when the Vatican sent people to investigate nuns in the United States.  Some were happy to greet the Vatican representatives and others were not.  Those who were not cited VII as if they were given carte blanche to do as they please.  It should be remembered that religious – male and female – are part of the institutional Church.  The institutional Church has very little to say to any group of people who wants to get together and support each other living holy lives in any manner that they see fit.  But if you want to plaster the word “Catholic” on your institutions, if you want the advantages of being an officially recognized Catholic order, if you want your charism and rule recognized canonically, then you must work within the structure of the Church.  If you don’t, then one side or the other must change or disassociate yourself from the official, institutional Church.  Period. 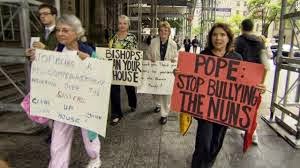 Paragraph 45 of the Church’s constitution, Lumen Gentium, from VII points this out.  It is the responsibility of the hierarchy of the Church to “feed the People of God and to lead them to good pasture.”  The Church is to act “in docile response” to the promptings of the Holy Spirit when presented rules of religious life that are presented to it for approval. (emphasis added)  When this happens it is understood that the Church is being entrusted with both a protective and supervisory role to make sure that the order meant for the building up of the Body of Christ will flourish in accord with the spirit of the founder.

In other words, if you don’t want to play by the rules, don’t apply to be on the team.  Go do something else.


So if word is getting to Rome that something funny might be happening among certain religious orders in the United States, of course they are going to come and investigate despite the bad press it might generate.  It is their job.  They would be remiss if they didn’t.  The very fact that some religious orders fought this visit is a sign in and of itself that it was time. 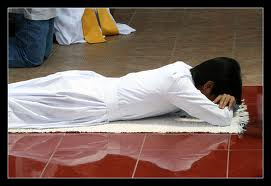 It is a two edged sword and it cuts both ways.  If you want the advantages you must also accept the responsibility.  For example, the pope may make a particular order exempt from local authorities and subject them to himself alone.  That may allow them to flourish in a way that would otherwise be difficult depending on the situation.  On the other hand, religious “must show respect and obedience toward bishops in accord with canon law, both because these exercise authority in their individual Churches and because this is necessary for unity and harmony in the carrying out of apostolic work.”
Those who want to live this specific type of life approach the Church, the Church doesn't go after them.  The Church, in turn, gives legal sanction of the life by raising it to the dignity of a canonical state and receives liturgically the consecration of such individuals.  The Church receives the vows, prays for those in these states of life, and unites their sacrifice of their lives to that of the Eucharist.


All that beings said, people will still think otherwise and that is Okay.  Just don’t invoke Vatican II.  It is a false premise.  Now we can have an honest discussion.
Posted by Fr. V at 7:24:00 AM