FRIDAY POTPOURRI: I'D LIKE TO BUY THE WORLD A SUGAR FREE, LOW FAT, SODIUM FREE BOTTLE OF LOVE IN A RECYCLABLE CONTAINER

There are certain advertising gimmicks that make me uncomfortable.  A local hospital had a campaign in which it invited the community to “believe” in them; the word “believe” appearing all over their advertisements.  I don’t “believe in” my hospital, I trust, respect, and am thankful for my hospital, but I don’t “believe in” it other than my belief that it exists even when I am home and don’t physically see it.
Years ago Coca-Cola (for those who are old enough to remember the commercial - *ahem*) wanted to unite the world with the “real thing;” Coke.  This happy little product would unite all the peoples of mankind in “a home furnished with love.”  Really?  I mean, that’s nice and all, but will a sugar drink for which they charge an outrageous price and is a contributor to so much obesity and illness unite the world in perfect harmony?


Well, as it turns out, God wants in on this market too.  (Lumen Gentium 12)  God establishes His Church that we might believe in Him and to be home to gather all the peoples of the world into one body as the “new people of God.”  This is the meaning of the world Catholic.  It means “universal.”  This is a faith for all people, all times, and all places.  (Our local Catholic newspaper has the coolest name in the world, The Catholic Universe Bulletin – which could be understood as the universal universe.  LOL.  Take that Unitarian Universalists.)

But though it is open to all people, we are not called to be all the same.  All peoples, their resources, their customs, their abilities, “in so far as they are good” are embraced and fostered by the Church.  This is one of the reasons she is patroness of the arts, for example.  She takes the arts of all peoples and purifies them toward the good and holy.  We don’t all have to be Caravaggios, but we are all called to truth and beauty.
So in this universal house, fed and nourished by the true “Real Thing,” is the dwelling of people who resemble those of every nation, custom, and race.  In this house are also people of every calling – in differenting duties – to help build up the body.  This weekend the Church celebrates the World Day of Prayer for Vocations.  “Vocation” does not simply mean priestly and religious vocations – but for those who have chosen marriage and those who have chosen to remain single for the glory of God and the benefit of their brothers and sisters.  And every one of these lifestyles need prayer.  And they are all dear and necessary to the life of the Church.
There are even different traditions within the Church that still point toward unity.  The Roman Catholic Church is not the only Catholic Church in the world.  There are also all of the Eastern Catholic Churches that are in union with pope.  We need not all practice the exact same way, but we do need to be in unity of belief.  To this unity, all people are called as the foundation of peace.  Radical Christianity does not involve bombs, it points toward radical peace, unity, and love. 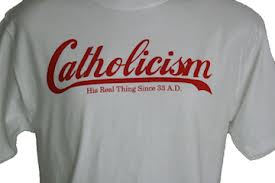 Pepsi-Cola hits the spot
Twelve full ounces
That's a lot
Twice as much for a nickel too
You know Pepsi is the drink of you.


That jingle was originated before you were born