O joy!  O rapture unforeseen!  I like to consider myself fairly well versed in symbolism used in the Church, but this past Friday I was schooled by one of you!  And that makes me happy.
There is a booklet at the parish that made a good attempt at unlocking the symbolic language used throughout St. Sebastian.  Going through it myself I found a few items with which I strongly disagreed with the author.  Further, not everything symbolic in the church was deciphered.  An example of this would be the three windows in the back hallway of the church which were posted last week on Friday Potpourri.  For a couple of years (seeking even advice from all of you) I have been trying to decifer these windows.  Nothing seemed to fit exactly.  At one point I had decided that the three windows had to do with the sacrament of confession.  The first window would be the passion and include the 30 pieces of silver, the whip, and Jesus' cloak. 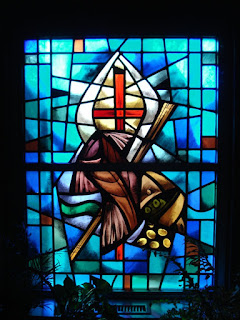 The second window would be the crucifixion through which He won for us the forgiveness of sins.  here is the Cross, Jesus, and the Holy Spirit. 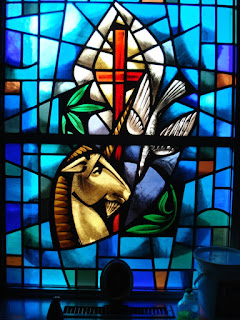 And then, finally, the sacrament itself with the stoles etc. 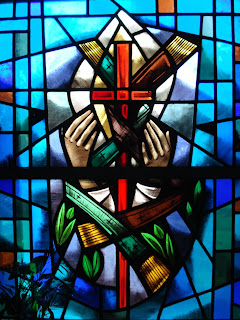 The problem is, it worked, but not really.  The cloak did not look like anything Jesus would have worn in modern imaginings and the whip looked more stick-like.  The second window kind of works but it was a stretch.  The third window works but why two stoles?
Mary figured it out!  She wins the Adam's Ale prize!  These windows represent the traditional three vows of poverty, chastity, and obedience.  Diocesan priests do not take a vow of poverty but we are expected to live at the plane around which our people live.  The unicorn is a symbol of, among other things, chastity.  And the hands of the priest here are being wrapped in priest's stoles and connected to Christ's Cross joining their priesthoods as one - a symbol here of obedience to Him.  For her full explanation please see the comments on last week's Friday Potpourri.

We are narrowing down the mysteries of the parish!  Here is a set of three more windows that are rather mysterious to me.  Once again I have an idea of what I think they are but will wait until next week to see if someone can school me again.  God bless! 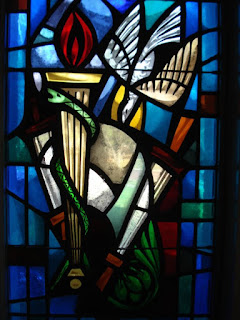 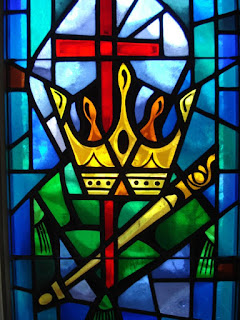 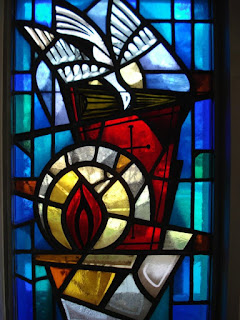 Gee, I'm glad to have been a source of joy and unforeseen rapture! :) Nothing like getting to the bottom of a good riddle or puzzle, though. Couldn't have done it without your insightful 2009 commenter on window #1 and an overall heightened awareness of Church symbolism, thanks to you.

So what, pray tell is the Adam's Ale prize?

And where in the church are those next three windows.

I too would like to know where these three windows are located in the Church building. Also what is the area in green to the right of the scroll depicting?

I have a guess for what they may represent. The first and third windows are similar in that there is the dove and a light of some kind (torch in 1, candle in 3), and reference to the written word (scroll in 1, book in 3). Could 1 be referring to the Old Testament and # 3 to the New? THe snake around the torch in 1 also referencing the Fall in Genesis points to OT. THe scroll makes me think of the Torah and the prophets. In # 3 the book looks more like a Bible. With the cross on it pointing to its NT status. Both testaments are inspired by Holy Spirit (dove).

The second window could represent Christ (the Cross) connecting the two testaments. He is the new King, thus the crown (and scepter I think?) of David's line which references the first window and begins the reign of the Kingdom of God in the 3rd window.

Well, that is my guess. God bless!

Maybe priest, prophet and king? I'm not sure how they are represented, though, other than the crown for king...

I think they symbolize the people of God. The scroll is for the Old Testament/Israel and the Book for the New Testament/Christians. The dove is the Holy Spirit who guided Israel and who still guides us. The snake is Original Sin whom Jesus defeats and therefore, is seen only in the first window. The torches are the people and signify their witness to God, "Let your light so shine" (Mt5:16). And finally the Cross with Crown is the reward of the faithful, "Be thou faithful unto death, and I will give thee a crown of life" (Rev2:10).

Anyone know where they are in the church?

They are in the hallway leading from the parkinglot to the narthex across the hall from the bride's room.

I am just another guy who likes a good riddle and learning about the symbolism of the Church. I don't actually know any of the symbolism, but I do like the Old Testament/New Testament symbolism both Mary and Anonymous are speaking of. The only thing I would add is my interpretation of the second window being that of Mary's Crown and the victory of the Cross (the new Adam and new Eve). The flaming sword being that of the angel guarding the entrance to the Garden of Eden. What does that green field with the tassels represent?

Hi, I am MaryR with some additional thoughts. First the center panel: the color green has several meanings such as faith, immortality and triumph over death. The pillow may signify rest. This would be consistent with that the center panel representing the reward of the faithful after death. The only image I am not sure about is the staff/scepter.
The snake in the first panel may have another meaning. A snake on a cross represents Jesus, this from John 3:14 and Numbers 21:8 , Moses lifted an image of a serpent on a pole.

I think it's the trinity
God the Father = Mosses with the torch (pillar of fire) and the snake (when He healed them of the serpent bites), The Torah (representing the covenant), The Dove for Noah,

God the Holy Spirit = Flame, dove, and inspiration for the bible.

That's what I got out of it. Just a guess

Wow! Lots of great ideas and observations on these windows.

I don't have much to add except that I took a look at the actual windows this week and it looks like the green section on the lower right of #1 is a little olive branch with a cluster of olives with leaves. Suggests the Noah's ark story when the dove returned with the olive branch perhaps? (Plant chapter on ChristianSymbols.Net)

That green square with tassels in #2 really had me stumped, but I like the pillow idea proposed by Mary R and the Baroness. Just found something in Continuum Encyclopedia of Symbols that says a pillow is "a symbol of a person of high rank who uses a pillow" as a seating pillow or a foot pillow. This further reinforces the idea of window #2 indicating kingship.

Also in window #2 the end of the scepter looks odd. Why isn't it just a round ball? If you look closely, it looks like a cobra is wrapped around the end of it (again reminiscent of Moses's staff with the serpent), but I might be reading too much into a simple decoration.

I would like to think that these three windows represented a nice triplet of concepts like the previous three windows did, and somehow related to the location in the church, but I can't see it.

I'm going to go with the idea of the first Anonymous (light, written works, Holy Spirit) that the windows represent the following:
1) Old Testament
2) Jesus, the King, who fulfills Old Testament
3) New Testament