YOU ARE GETTING VERRRRRY SLEEPY.

Sorry there was no post yesterday. The day was jammed and there simply was no time. Then today Blogger was down during the time I would have been able to work on it. Here is post intended for yesterday so – see you next week!

I remember watching movies at the seminary. If there was one, brief, inappropriate scene, it was at that exact moment that a faculty member would walk in. It was embarrassing but it made me aware of what I was filling my head with; a lot of junk that I did not need.

Last night Fr. P, Fr. S., and Fr. M., were going to watch the special on the Vatican on the local PBS station. I have not really watched T.V. since Fr. P. moved here a couple of years ago save for some sports games or the beatification of John Paul. So before the show was to come on I turned on the T.V. to try to find the correct station. I must have hit the payload of inappropriateness just like the professors catching the seminarians watching a decidedly unsuitable scene from a movie. 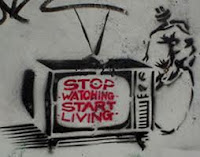 The first scene involved what looked like a man (boy by maturity standards) proposing marriage to a woman before all of his friends. He got down on one knee, brought a ring box out of his pocket, and asked, “Will you move in with me?” and when he opened the wring box there was a door key in it. Of course the friends cheered and the girl cried and said, “Yes!”

Then I flipped through to find the station that tells you what is playing. While waiting for the stations to cycle though there was a commercial for a contraceptive called “Beyaz,” such an odd name that I thought it was a joke. Beautiful women were running and exercising and picking flowers all because they could live like the couple in the above scenario but be free from any consequences. Well almost. Taking this drug may cause blood clots, stroke, heart attack, and not keep you free from HIV or STDs. BUT you can continue to jog and garden without fear of pregnancy (apparently a worse fate than a blood clot, stroke or heart attack) because you are artificially sterile. 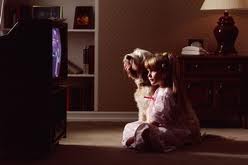 I think when walking the dog at night and seeing the blue glow coming from so many windows. How this stuff is pumped, in large doses, into our homes every day – into nursing homes (please, God, if I am sick in bed and unable to respond, do not let them turn on a T.V. to keep me company) and now into restaurants, grocery store checkout lines, and in our cars. Each of us may say, “Well, I don’t really believe the things they say,” but how can we stay true to that when it is presented to us daily with the message, “This is normal.” Worse yet, when we use T.V. as an unmonitored baby sitter, what will happen to young folk? Then again, even if it is monitored, who can prevent unintended raunchy commercials? How many people do not even see this as a problem?
Posted by Fr. V at 11:39:00 AM

Email ThisBlogThis!Share to TwitterShare to FacebookShare to Pinterest
Labels: Television

Yes, the children not only learn the message that the program is directly teaching. They also learn that this "stuff" is important because Mom and Dad are watching/letting the children watch.

In my home, we have mainly watched EWTN. Even though my son was not old enough (at first) to understand the adult programs, he learned what was important to Mom and Dad.

I am thankful that I never changed my TV to get the new programs. I get my news from the computer. Unfortunately I cannot get EWTN, but it gives me more time to read. And Catholic World News is great with its commentaries.

My wife and I have four boys, 3 years to 8 years old. We monitor closely when they watch television.

I'm appalled by gore and violence in the promos the networks air during sports broadcasts, particularly.

We always keep the remote close, but even then they are exposed to it in brief segments.

We've trained them to avert their eyes by yelling "Don't Look!" unfortunately we say this often

My wife and I have a 3 year old and 10 month old with another on the way. We barely turn the TV on at all. We don't have a basic cable TV package because we have been appalled by the content of most channels. I watch significantly less sports than I used to primarily because of the garbage that not only comes on commercials (we turn them off) but within the sports programs themselves (i.e. scantily clad cheerleaders, scantily clad fans in the stands, inappropriately dressed sideline reporters, etc.). How families can let TV douse their kids with filth day after day I'll never know. TV is much worse than it was not only 40 years ago but even 10 years ago. Thank you, Fr. V, for touching on an important subject.

Most children watch cable completely unfiltered by their parents. They are also playing video games rated "Mature" because all their friends are. Even if their parents are vigilant, they are watching this stuff at their friends' houses.

When I am at the local hospice taking care of patients who are unconscious, I usually turn of the blaring TV that people assume they want on. It's as if the devil doesn't want you to have respite even in your last hours to think about where you are headed.

Thanks for the post. This is so true of our media-saturated culture. Some of the shows, such as Glee are also trying to destroy the views of traditional marriage. I appreciate you tackling this important topic relevant to us today. Roger

I am glad to see a priest talking about this publicly. My childhood priest used to talk about this in his homilies at least once a year, usually after recovering from some illness which gave him the time to watch tv. That was over 18 years ago and things have gotten much worse, but I have never forgotten what he said.

He passed away on Friday at 80 years old, but those little moral lessons that he fearlessly preached from the pulpit shaped my sense of appropriateness is ways my parents couldn't. Keep up the good work and make sure the kids in your parish hear it.