FRIDAY POTPOURRI: DER ARE VIMPS IN EVERY PARISH

On Maundy Thursday for the Eucharistic procession at the end of Mass, the deacon and I put on humeral veils in order to carry the Blessed Sacrament. At our parish council meeting the other night somebody asked, “What was that shawl thing you were wearing?” Though it has been in use in the Church since the seventh century and is still called for in current rubrics (another fallacy of what Vatican II did away with) it seems some people are unfamiliar with it. 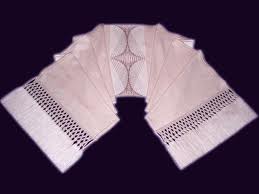 The humeral veil is a piece of material about eight feet long and a couple of feet wide, sometimes with a clasp and hand pockets that is worn around the shoulders. It is used liturgically to pay honor to some sacred object particularly in procession such as sacred relics. It is used during benediction to get the point across that it is Jesus, not the priest who is extending the blessing. For one, it is the veil, not the hands of the priest that is touching the monstrance. Secondly, when lifted aloft the veil covers the priest in order to bring attention to Him. Jesus is the one that matters, not the priest. 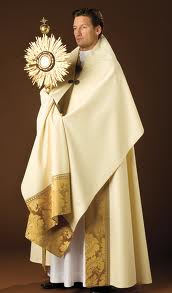 There is a very similar article worn whenever the bishop is celebrating. The description would be very similar but when used in this case it is called a vimp. One each is worn by two servers known as the miter and crosier bearer who, when fulfilling this role, are also called vimps. (Are YOU calling ME a vimp?) It serves much the same purpose but for different reasons. It is the vimp, not the hands of the server that touches the miter and crosier out of respect for the objects of the office, but it also serves the great purpose of protecting them from being soiled by so many hands.
Posted by Fr. V at 7:15:00 AM

Thank you, Father. I only recently learned about the humeral veil but the "vimp" is news to me.