On Sunday, front page, above the fold, the Cleveland Plain Dealer carried a story about break-away Catholic parishes. If you follow the story inside there was also a second story. Together there was about 1 and a half full

pages dedicated to congregations that have split from the Catholic Church and are doing just fine thank you very much. Throughout there is constant mention of St. Peter, a community that has left the jurisdiction of the Catholic Church but retain other Catholic beliefs and practices. They broke away in protest against the diocese’s plan to close the parish as part of its program of restructuring.

There are two points that are worthy of consideration here. The first is that such a fuss is being made in the first place. People break away from Protestant denominations constantly. They rise and fall so quickly that it is difficult even to keep an accurate record. Like soap bubbles on roiling water they form, grow, split into ever smaller proportions, join elegances, grow, pop, change, rejuvenate, large bubbles in the center, thousands of smaller ones all around. Today there are literally thousands and thousands of denominations and independent churches and the number continues to grow. For various reasons; leadership, theology, philosophy, political reasons, geographic, popularity, etc. the world of Christian denominations is in a constant state of flux, dividing as they feeled called. There are some notable exceptions; say that noble main-line Protestant denomination building that has stood on one of your church corners for decades. But there is even a good chance that they have realigned themselves with another “conference” or that others have left their conference for some other.

The point is: it’s only really big news if it happens to the Catholic Church. And that shouldn’t be news. Is anybody surprised that this happens? It has been happening in earnest for about 500 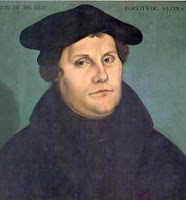 years. It is called the Protestant movement. It began with groups of people dissatisfied with the Catholic Church for various and sundry reasons, sometimes very good reasons. They protest against the Church by breaking away, establishing their own way, having their own ministers and leadership, often beginning with the thought that when they have effected change in the Church, they will reunite, but not always.

The congregations mentioned still want to call themselves Catholic. I understand that. It does lend a certain legitimacy. I am sure that they have very good reasons for doing what they do though what is quoted in the newspaper is largely sound bites and bumper sticker slogans, not philosophy or theology. I trust that if we were to sit down with anyone from any of these congregations, particularly the ministers, they would have a well thought out manifesto. That being said, part of the definition of being Catholic is not to be a "Church", but a parish united to a local Church, that is, a diocese. The diocese in turn is part of the universal Church, in our case, the Catholic Church. Is it possible to not be a part of this structure and still claim to be a part of the organization? That argument depends on what side of the fence you are on. On this side we would say no, on the other, many would say yes including many among certain segments of the Anglican Church.

The big news, IMHO, is when a congregation is united back to the Catholic Church. Of course that barely merits a mention in a tiny article on the back page of the comics amidst car sale ads. Good news (well, I am biased, I think it good news) doesn’t sell. Division sells, not unity.

Still, my heart goes out to the congregation of Saint Peter. When you reach a level of frustration that you feel so helpless what else is there to do? But now it is an impossible situation. Both sides, perhaps with all good intentions (and I am not saying that I could have suggested anything better) have set up a lose-lose situation. The two positions stand on either side of a balanced

teeter totter waiting for the other move and start a chain of events. It will take tremendous grace, cooperation, understanding, sacrifice, effort, and good will for this not to end as a messy sword thrust and the gore spilling out upon the ground ending up on the front page of the paper. Some might even think it impossible.

The breaking away may not be seen as very Catholic, but the process certainly is one. Since the earliest days of the Church – even in the writings of the Bible, there is the constant testing and stretching of what it is to be Catholic. When a point has been taken too far, when the rules have been changed so much that a person is playing a different game, the Church defines herself and invites others to remain or depart. That’s why we have laws and rules – not because we sit around making laws and rules, but because somebody tried to do something and we had to think about how that does or does not play a part in the Catholic Christian faith. And today we see it played out in this most dramatic way.
Posted by Fr. V at 6:54:00 AM

Since "controversy" sells newspapers, the PD should print your response. It might help them stay afloat.

I sent (by e-mail) the 'rant;counter-rant' to Michael O'Malley, author of the Plain Dealer article'