TUESDAY QUOTE OF THE WEEK XCVIII

FINDING TRUTH WHEREVER IT MAY BE FOUND: "Any person seeking consolation wants not a priest who has super strength, all the answers and solutions and possesses all qualities, but a priest who listenes . . . And who can listen? Someone who has knowns and loved with weaknesses and woundedness . . . someone who allows himself to be poor and who in the face of weakness hasinfinite confidence in the source of strength and healing, namely Christ . . . These are they who truly listen, who truly intercede . . . These are the wounded healers of the Church." Avery Cardinal Dulles.

QUOTE II: ". . . I think that to turn the Catholic religion into something dull is practically unforgivable." William Oddie in Gilbert Magazine

HAPPY FEAST OF SAINT SEBASTIAN! I found this picture in a book from the late 1800's in the rectory: 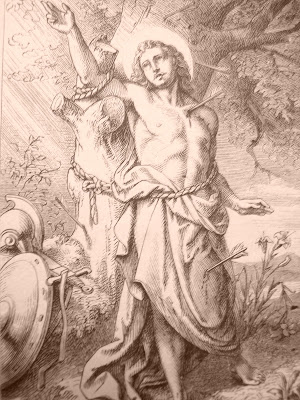 This is a picture of the Basilica of Saint Sebastian purchased by Fr. K and which hangs in the rectory. Look closely at the reflection and you'll see me taking the picture. If you are interested here is what the basilica looks like today. Not much different! 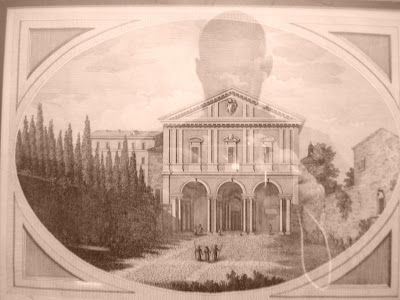 Fr. D. sent this in for those who may be struggling with porn. He writes, "I read a couple of eye-opening articles recently about the staggering numbers of people whose lives are being ruined by porn . . . One of the articles I read directed me to a website that I had never heard of before: http://www.xxxchurch.com/ It's a site designed to help folks who are struggling with addictions, and even reaches out to those in the adult film industry and works to bring them healing and conversion. It's one of the best resources I've come across on this issue, and I am passing it on to you because all of you are in a position where you might be able to help some folks by directing them to this site. Those of you who write pastors columns or edit bulletins might think of sharing this site with parishioners. Those of you who work with young people can use this site in catechesis and conversations. It also may be very useful to confessors and counselors. I know this won't solve the problem, but it is good to know that there's some help out there for our people who might need it." Thanks for sending that in.

Here is a second site that also might help.

The Diocese of Cleveland Enewsletter writes, "Urgent: Post Card Campaign To Oppose The Freedom of Choice Act!Heightened attention is aroused by President-elect Barack Obama's reported statement that he would look forward to signing the Freedom of Choice Act (FOCA), which is currently in Congress awaiting passage. Read the complete "Legislative Hot Line - January 7, 2009">. Those in the Diocese of Cleveland can look here to see who to write to parish by parish.

Here's a Catholic spin on the inauguration:

Email ThisBlogThis!Share to TwitterShare to FacebookShare to Pinterest
Labels: quote

Dear Father, Thanks for that video! I just met Fr. Morris' mother this past Friday morning at the Right to Life pastors' breakfast. She and her husband are starting a group that will unite local churches and other agencies to work together on pro-life issues.