MONDAY DIARY: SO WHAT DO YOU DO FOR A VOCATION?

Ah . . . retreat was great. This particular retreat is for priests only given by Fr. Benedict Groeschel at Trinity Retreat in New York. A typical day includes about four conferences, Liturgy of the Hours, Mass, Holy Hour, and a fellowship hour. 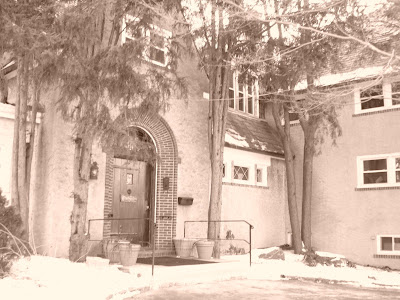 Of course there was the afternoon break which afforded time for a long walk. Fr. B and I usually headed out toward the business district where Saint Augustine Parish is located. There we would go in to talk things over with Jesus for a little spell and light a candle. I love this little ritual/devotion and feel sorry for Catholics where lighting candles is not an option for those who get some spiritual benefit from it. I was disappointed however to see that they had replaced some of the candle racks with light bulb racks. If you put in a quarter, complicated circuitry would switch on a small light bulb disguised as a candle for some unspecified amount of time. (There is something terribly tidy and practical about this so I passed these by and went to the dirty and high maintenance candles by the sanctuary.) 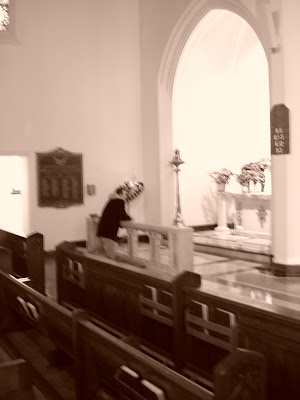 Apropos of nothing, on one of the walks I took this picture. Just thought it was neat and so share it with you. 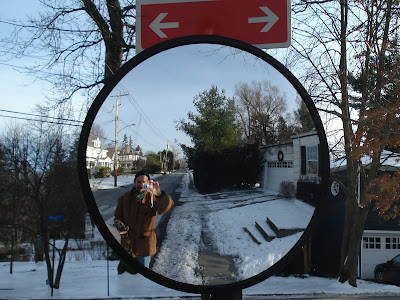 Anyway, one of my goals on this retreat was to concentrate on how God is changing my ministry now that I have been named an administrator. One evening after dinner Fr. Groeschel made himself available for private conferences and confession. During my time with him I asked him for any advice he might have for a new administrator. 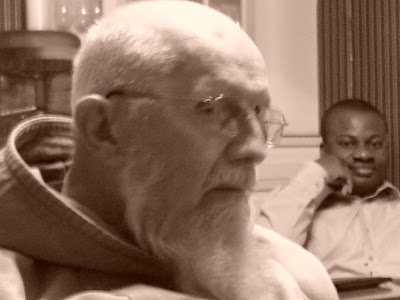 He admitted that he has never been a pastor. “What a beautiful word: Pastor.” (This was not the time to interupted and clarify that I am an administrator.) Pastor is a beautiful word. Ultimately it is a relationship: a specific relationship. It is a relationship with a very particular group of people known as a parish, it a relationship with a bishop whose representative you are, there is a unique relationship with the greater Church and people in general. He called it being a gatekeeper. The example was given that in New York people do not stop someone on the street and ask them anything, but there are certain gatekeepers which you can with some amount of comfort. Priests and religious who wear identifiable garb are examples of these. Given a random group of people on a busy street corner priests and religious, for a great number of people, are the “go to” people with whom a stranger can feel comfortable. At least I’ve found that true in my life. And finally there is the special relationship that you have with Christ in whom you act as Persona Christi.

All this being said, C. K. asked me just before I left on retreat to post all the reasons to became a priest. There are so many answers one can give from the sublime, to the practical, to the silly. But on this retreat I think I narrowed it down to only one: Is this the life to which you are called? Is God calling you into this particular relationship with Him and His people?

I have shared with you before the sadness of the stories I have heard over the years. Men especially who said they should have never married and how they wish they would have taken their call to the priesthood more seriously. (The converse is also true.) I cringe when I hear of a parent who tries discourage their son or daughter from the priestly or religious life. What if that is what they are called to? Despite the intention a parent might have to save their child from something that they do not value, they may be setting them up for a life of discontent. And a vocational discontentment effects not only the person, but all those who surround the person: those nearest and dearest.

So, the best reason to become a priest? Because you are called to it. I know I would not change it for the world. I wonder if I have grown to love it so or if my disposition and joy are geared toward it. That is hard to tell. But forced to start all over again, I have no doubt but that I would make the same decision if the Church would have me again, for anything else would always be second choice for me.

I was privileged to attend the ordination of 12 young priests at the recent Eucharistic Congress. It was held in the Coliseum so that there was enough room for 30,000+ observers. Of course it was not full. What the space (a hockey arena) lacked, was more than made up for the catholicity of the people present, including an admirable collection of the Episcopal Hierchy, cardinals and bishops, and the Papal Legate, and a collection of laity, priests, and religious from around the world. What a wonderful celebration of the gift of the sacrament of Ordination, the gift of priests and bishops in our Church, which is a central part of the mystery of Christ's institution of the Eucharist.

"No priests = No Eucharist".

What a vocation! Where can you find anything to equal it? You can't. And to those who are called, such a precious pearl, such a wonderful gift.

I wish I could have joined you at Trinity. It is a marvelous place for priests, and to sit at the feet of Fr. Groeschel is a fascinating week. Thanks for the post and the thoughts on 'why be a priest' I'll steal it for my use!

From a parishioner's point of view, it is nice to deal with a priest who "likes" what he is doing and is comfortable with his identity as a priest. I thank the Lord that He sent you to us.

Bryan was over today. I read him the last 2 paragraphs of your post. Just keep praying!
I don't understand why some parents would discourage their sons and/or daughters.