TUESDAY QUOTE OF THE WEEK LXXXIII

FINDING TRUTH WHEREVER IT MAY BE FOUND:

"That is why we so readily give our assent to the absurd proposition that a computer can add two plus two despite the fact that it can do nothing of the sort - not if we have in mind anything remotely resembling what we do when we add numbers." Steve Talbott in Maggie Jackson's "Distracted"
QUOTE II - "Wi

thout self control we can have the strongest motivations and set the highest goals, yet we will invariably get sidetracked from pursuing our aims by the distractions, temptations, and obstacles in life." from Maggie Jackson's "Distracted"
IN OTHER NEWS:
Could this be a Quote Tuesday without Jay's joyous proclamation of another Catholic Carnival? Here is Catholic Carnival 190!
The Diocese of Cleveland Social Action Office wants you to know about a few sites to consider during this election year. Here is Faithful Citizenship, the Ohio Catholic Conference website, and the Catholic Action site. For a print out of the Ohio Bishops' recommendations on key ballot issues, look here.
On Monday I had a funeral at an absolutely charming but tiny parish that seems to be slated for closing under the Diocese of Cleveland clustering plan. Of course emotions run high in situations like this even if you understand and even agree with the necessity of the move. It is little wonder that there is some resistance to it all as reported recently in the newspaper. Here is the response by the diocese courtesy of the Diocese of Cleveland Enewsletter.
A couple of times this week people have mentioned a site called ePriest. It is mostly a resource for priests but seems to be of interest to a greater audience and so it is presented for you here.
P.C. sent this site in and it seems quite cool. "Singles of the Eucharist" might be of particular interest to some of you single Catholics out there. Thanks P.C.!
I can neither recommend or not recommend the following site other than to say that I find it intriguing. One of the games offered to play is called Pope Wars and my computer will not play it. I would appreciate someone taking a look and letting me know. I was however able to play Asteroids which I'ven't played since high school down in the bowling alley of Slovene Center in Barberton. WARNING: ADDICTION LEVEL HIGH.
Finally, 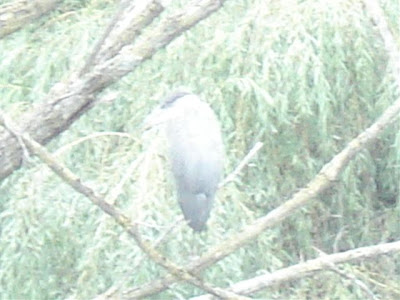 here are two pictures for you to peruse. One is using the magnifying feature on my handy dandy little camera thus capturing this crane. See if you can find him again in the unmagnified picture. 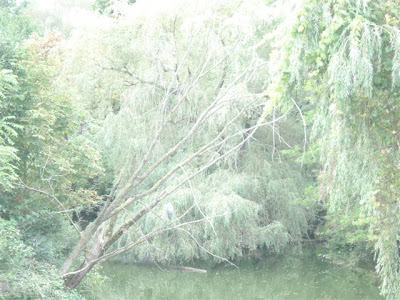 Fr. V., ~ I think that's actually a Great Blue Heron, not a crane. Cranes don't hang out in trees or tuck their heads like that. Herons, however, apparently LOVE trees.

I think I found it, unmagnified, though! :-)

Those birds spook me. I was driving my kids to school one day and suddenly there was one standing right by the side of the road, still as a statue, just watching. In my rearview mirror I saw him lurch into the air (there is a little cliff falling into a pond there) and fly away. It just bothered me for some reason.