A new endeavor is begun today. We will look at the particular symbolism of one parish Church namely that of Saint Sebastian in Akron. We begin with the windows in the clear story which depict the Litany of Loreto that has Mary as Queen of Angels, Queen of Patriarchs, Queen of Prophets, etc . . . which in turn also tell us the story of salvation.

Most interestingly are the windows that ended up in the sanctuary. These windows depict the angels and their role in salvation history. As the Mass is said to be the closest thing to "heaven on earth" how appropriate to have here the action of salvation history that took place with heavenly bodies if I may refer to angels as such.
The word "angel" is not what these beings are but rather what they do. They are spirits. Angel means God's messengers. This is a bit like a person being a mailman. Delivering mail is what they do not who they are. These angels then act on God's behalf to further the cause of salvation history in creation. 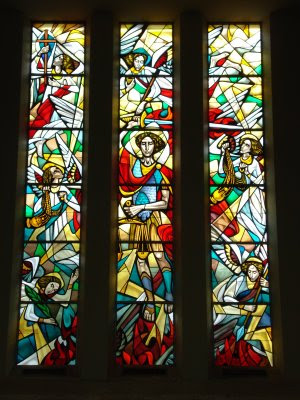 To the left as you face the sanctuary is a window depicting the Archangel Michael. Here Michael is thrusting Satan out of heaven with the flaming sword of expulsion in his right hand and we can see just the tip of the fallen angel's wing as he descends into the fires of hell. In his left hand he holds the scales of justice as he administers punishment to Satan and his spirits against God. On the bottom left is an angel holding a palm branch that, as mentioned earlier, represents victory. Above that angel is an angel swinging a thurible (balanced by a similar angel on the other side of Saint Michael) whose rising incense asks God that our actions and worship be pleasing to Him. "Let my prayers be set before You as incense; and the lifting up of my hands as an evening sacrifice" (Psalm 141:2). At top left is an angel holding a cross that was intended to have conquered God but then is used by God as the ultimate foil of the Devil by which death and sin is defeated. The final angel at center top holds the cup of salvation. It is interesting to note that of the private prayers a priest might say before receiving communion in part is this, "Let it not bring me condemnation but health in mind and body." For those who are friends of God it is life giving elixir (My cup runneth over), for those who are not it is condemnation (The cup of wrath). And thus is the power of darkness overthrown. 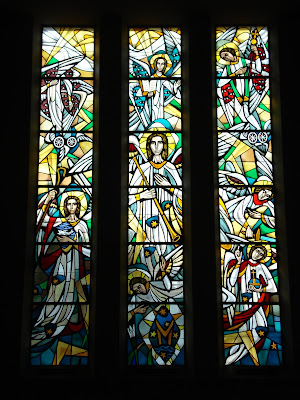 Here is the window directly opposite. At center is the archangel Gabriel who, with horn in hand, announces to Mary, depicted below by the letter "M" and the lily (symbol of her purity) that she has been chosen to be the vessel of the incarnation. To his left is the archangel Raphael accompanies Tobia (Tobit's son) on a long journey (hence the staff) and provides for him a cure for his father's blindness made from a fish (hence the fish).

Across the top of the window are three cherubim who have six sings and are covered with eyes and are thus all seeing creatures. The first orders God's command with pointed hand directing Tobit and the directives of the Old Testament in general. The second holds open the Old Testament showing that Jesus is to fulfill it. The last wears a stole and points to Jesus' scepter showing Him to be the High Priest, below him an angel holds a sword showing Jesus to be the Victim, and finally the orb showing Him to be Ruler of the Universe. Here can be seen three great ages: the first panel before the incarnation, the incarnation itself, and creation after the incarnation.
Posted by Fr. V at 4:09:00 PM

Dear Father, Thank you for this detailed explanation. Truly, stained glass windows, mosaics, and statues provide a 'visual catechism." I happened to be at another local church yesterday and wondered why all of their "stained glass" windows are abstract patterns. I could not even find the cross. Same for the glass block design that encloses their miniscule chapel. We at St. Sebastian (and other "older" churches) are truly blessed to show our Catholic identity with these signs.

Not yet! I hope to find something like that here though!