The next title for Mary as queen in the Litany of Loretto and subsequently the subject of our next set of windows of consideration is Queen of Patriarchs. Notice in this window the color blue that was all but completely missing in the first set of windows located in the sanctuary. As we move further back in the church there will be more and more blue glass in the windows. This is done in part as a method used by artists for centuries to help draw attention to the altar. The further back in the church a window is, the darker the glass used. This draws one's attention naturally to altar area where the brightest light is. A second reason hearkens back to the founding pastor, Monsignor Zwisler who had a great devotion to the Blessed Virgin Mary (blue being the color of Mary). In tribute to her the windows include quite a bit of blue glass but lessens as the windows near the altar where the focus is on Jesus.

There are seven patriarchs; Adam, Noah, Shem, Abraham, Isaac, Jacob, and Joseph. The word patriarch refers to the heads of prominent families of the Israelite tribes that appear in Genesis. The two focused on here are Abraham and David though David's title as patriarch is one more of honor rather than in actuality (Acts 2:29). 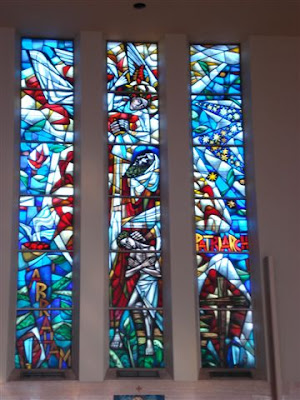 Here is the famous scene in which Abraham was willing to sacrifice his son for love of God and the angle stops his hand while pointing to heaven to announce God recognizes his willingness but calls him to stop. Notice down in the right hand corner is a cross. That is because this story is a foreshadowing of the story of our Father and His only Son later. The stories have many parallels. A father who is willing to sacrifice his own son for the forgiveness of sins. The son is born of under mystical circumstances, is without blemish, carries the wood of his own death on his back, brings about forgiveness by obedience, and finally, in the end, for Abraham a ram was offered but in the case of Jesus, he is the lamb that was offered.

The stars that trail down the right side depict God's promise to Abraham that because he so loved God that he was willing even to sacrifice his son that God would make his descendants "as numerous as the stars in the sky." The burning coals at the left are the coals that they brought with them to use in the sacrifice. 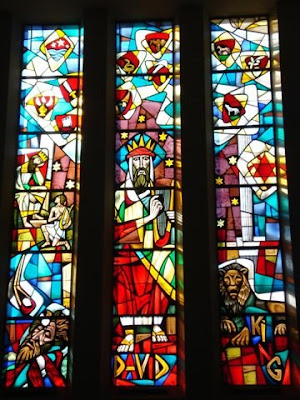 Here is King David seated upon his thrown. Over his head like the stars of the sky are depicted eleven of the twelve tribes of Israel. At bottom right is the symbol of the tribe from which he comes. "The lion of Judah". The six pointed star next to him, the star of David, represents the Kingdom of Israel. Notice that David holds are harp as he was a writer of songs. About half of the psalms in Scripture are attributed to him. To his immediate left is a young David playing for then King Saul. Below that is the head of Goliath. Just above the head is David's sling with the smooth, round rock in it. There is another rock embedded in the head of Goliath who was beheaded by David with his own sword and thus you see the river of blood flowing below.

Dear Father, I marvel at how these windows tell us so much about salvation history. They are like icons. Whoever designed them had great knowledge of our faith as well as artistic talent. Thank you for helping to expand our appreciation of what we may often take for granted.

-The stories have many parallels. A father who is willing to sacrifice his own son for the forgiveness of sins. The son is born of under mystical circumstances, is without blemish, carries the wood of his own death on his back, brings about forgiveness by obedience-

This story is part of the foundation for our Traditions concernign Mary. Isaac, a type of Christ, is an only son, just as was Jesus. His mother had no children besides him. When people insist that Mary had other children, they turn this prefiguration in Genesis into something meaningless. We know Jesus was an only son, from the Tradition passsed down by people who knew him, but also because of Scripture. Without Jesus the only son, this passage is worthless.

You see Rob - that is why you are so cool.