There are times when even I think that the Church needs to get with it! Update! Be more relevant! Hip! And there is no place that we are further behind and not reaching out to people where they are as in the recognizing and naming of modern, significant, and enlightened heresies. I mean, who today can relate to Nestorius or Eutyches? How have they touched our lives today? When have they appeared in the gossip pages or been debated on Law and Order? Whe

n was the last time you heard of a Macedonius prayer meeting being held in some old convent or Pelagianism being sited in the latest Pew Pole as dragging people away from mainline churches? I will tell you: NEVER! It is time for the Church to come into the present century and stop glorying in the past. We must be forward looking and concentrate on growth. To that end I thought I would help out with some suggestions.

ANTITHETICALITES – They are known for sampling and combining various aspects of world religions to form their own particular religion even though the practices and teachings contained therein are directly opposed to one another. This might be exemplified by the combining of a religious practice in which God is passive and impersonal (as found in some Eastern religions) with practices that recognize Him as a God that is active and personal (such as in Catholicism.) “Look into my crystal and tell me that it doesn’t all make perfect sense.”

PSEUDOLOCUTIONISTS – This is a sub-set of Christian who believes that God directly speaks to them and gives them exemptions from the Gospel message. When confronted about one of their practices that is in direct opposition to the faith they will respond, “God and me have a special understanding,” or “Jesus doesn’t care about those things.”

(Not to be confused with old heresy known as Donatism) Donutism is the propensity for some Catholics to leave their parish and join a denomination based on the quality of the donuts and coffee that that is served before, after, and during Sunday services.

EMOTIVISTS – Adherents believe that they can know the will of God (commonly referred to as "OhmyGod") by how any particular proposition makes them feel. Hence there is not a well-defined theology for this group as it varies from person to person and in a person from moment to moment. “How could anything that feels so good be bad? God wants me to be happy!” Devotees are particularly known for their ability to filter out all aspects of guilt. 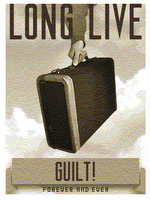 OCTORBITISTS – Note the different spelling. This is not the Octoberfests, a little known cult that involves the drinking of great amounts of beer in October but the Octorbitists. Oct, meaning the number eight and orbits referring to path the earth makes around the sun. This sect only recognizes the Church for about eight years usually only stopping in the parking lot Monday through Friday to drop their children off for school. They do not recognize the spiritual role of the Church but submit to its authority in teaching math, science, and the making of collages.

SEMI-OCTOBERISTS – This sub-group does not necessarily recognize the educational value of the Church either but does at least see CCD classes as a superior baby-sitting session.

Those are my suggestions. I hope they help people feel included and recognized. NEXT: Suggestions for new sins to be painted into the back wall of the Sistine Chapel!

“Could such a bond be broken? . . . I feel the depth of my spirit answer that it could never happen, unless one became something awful, like the originator of heresy.” St. Pio.
Posted by Fr. V at 12:24:00 PM

i think you think too much ... at least i hadn't id'd these heretics before - now i'll be on the look-out and nail them to the wall [after my coffee and donuts, of course]

Oh, and while we're on the subject...on the Donatists from history, this is how I remember their heresy:

If a group of Donatists were protesting the Church, they would be chanting:

"Jesus Christ is a sham! He's only a hologram!"

OK, that's my only contribution to the Friday humor. :-)

Those Donutists - are they the ones who often say, "I'm not being fed"?

Since I pretty much fall into all those categories I decided to start my own church and have complete control of the donut table. Becoming a womyn priest in the Order of We Can Too be Priests (OWCTP), has taken me up the steps of the sanctuary to claim my rightful place. In particular the Antithetecalites are welcomed in our order.

Chesterton would've loved you all.

What about the "Yatgodometes" - When admonished for any number of unchristian acts and with all of their arguments rightly countered with the true teachings of the Church their last gasp of an argument is the adolescentish "You aren't the god of me!"

Oh my. The comments are as hilarious as the post. The saddest part of it all, though, is the truth therein.

People who use the word "hip" are probably anything but "cool". People who say "get with it" are jerks.

The best part was sitting with this word and trying to figure it out before looking on! LOVE IT!

I have added a few to your excellent list.

is it judgmental if, when reading each heresy, i found myself involuntarily identifying examples of adherents of those heresies in my own life?

The Donutists should try my parish. I'd say Mrs. Kwiatkowski's cupcakes surpass anything a megachurch could offer. But they're only available AFTER Mass.

You forgot the sacrahedonists - those who only come the the sacraments - Baptism, First Communion, Confirmation and Marriage - for the party!

Would the donutists be interested in the penitential Lenten donut?

don't forget RECongressism: Defined as people who actually like the Religious Ed Congress in Los Angeles. Known for promoting such heresies as women's ordinations, ICEL translations, and no actual catechesis

Joe -
When I first saw the REC of your submission I assumed it had something to do with with those who only attend masses at which they needed to video record something.

I think the ones that come to video something are under another category: videorecism: Defined as those who go to REC and just go to video.

I love the videos, but I say, why waste time videoing there, there's much better paces to waste digital film on (like St. Therese Church)

Don't forget the Supramusicalists: people who leave Catholism not because they disagree with doctrine, but for a local Protestant church with a better choir.

Or GarageSaleandMoving movement: those who choose a church based on how many of its members turn up to help a family during moves and other domestic events.