MONDAY DIARY: ALMOST EXCRUCIATINGLY TRUE STORIES: PUT A STRING THOUGH THE SLEEVES OF YOUR COAT AND TIE YOUR MITTENS TOGETHER SO YOU NEVER LOSE THEM


Regular readers of Adam's Ale will recall that recently St. Sebastian laid to rest its third pastor, the well beloved Fr. McDonough.  It is a tribute to him that, even though he had been retired for about two decades, we still expected an onslaught of people for his funeral and a council full of clerics.

I have to laugh when (obviously non-Catholics with little contact with or knowledge of the Church) claim that "those Catholics" are all a bunch of mindless rule followers in lock step with the Pope.  (Let me pause for a moment to wipe the tears from my eyes from laughing too hard.  There, that's better.)  It may be that no-one will ever be able to destroy the Catholic Church, but if you want proof that it is solely the Holy Spirit holding this whole mess together, try doing anything with priests that requires them to cooperate in a single goal with a single purpose requiring even little effort.  It just aint gonna happen.  (I can say this because A) I am a priest and B) I am very guilty of this.)

So when it came to preparing for the priests to show up for the funeral, I knew it was going to be like herding cats (see video above) to get them all to vest in the right place.  Our parking is horrible, our campus confusing, I am too much of a control freak, and it was freezing outside for the first time all winter.

So I tried some preemptive strategies: 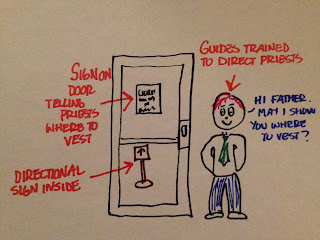 Now, to be fair, for those priests that showed up early, found parking, weren't rushed, and weren't afraid of dogs, this was no problem.  But for the guys that showed up just in a nick of time, who had to park three city blocks away, were cold, irritated, and just wanted to change and get into a pew, they were not interested in the finer points of finding the exact proper place to vest. 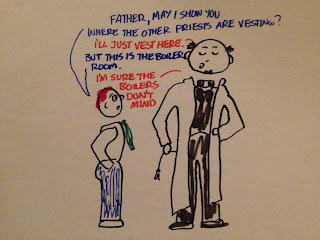 As you walked around the buildings, running into vesting priests was like running into Munchkins in Munchkinland, or pigeons in the attic of an abandoned warehouse, or or or former movie stars in an upscale rehab facility.  Hallways, bathrooms, storage closets, baptistry, you name it, there was probably a priest or two vesting in it.

And really, I didn't mind.  No really.  Even though I like things in their place (that was one of my Mother's mottos: A place for everything and everything in its place) I understood the spirit of the day and the difficulty for the guys who lost a close friend and who just didn't want to fuss.

THAT BEING SAID:  It was AMAZING how much clothing was left behind.  A walk around the buildings turned up coats, jackets, hats, and single gloves.  Remember I said it was the first day of earnest winter?  I have no idea how they got home without contracting hypothermia.  THIS IS WHY WE SHOULD ALWAYS LEAVE A CALLING CARD IN OUR COATS!  I have no idea to whom they belong and since we all wear black, it's not like you can show it around and someone would say, "Hey, that looks like Pete's" 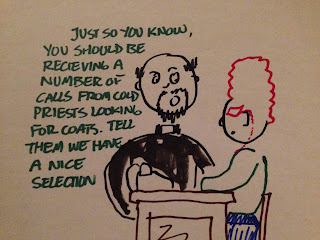 Mitten clips and a hat that tied would have been a good addition to my wardrobe today. I walked the mile and half to Mass this morning (uphill, through the snow, we had a blizzard here last night), and managed to drop my hat somewhere along the route. I sent up mental prayers to my mother who used to insist that our Sunday hats be tied under our chins.

Dear father,
Its funny because it it TRUE!

Today's blog should be chapter 237 in your book,
'Welcome to St. Sebastian's"

Father V, at the opening of the cat-herding video, I thought this was the deranged cowboy Curly from "City Slickers". Remember Curly?! Oh, boy! Look out! Perhaps Curly needs to be enlisted to help organize all future events?!

...Sorry, father, I simply cannot help myself from serving as spelling patrolman. Sigh. Just a gentle reminder, as English teacher Miss Gruey used to say: "Class, pay attention: I before E, except after C." (receiving)

Thank you for your blog site. It keeps me smiling--and I learn lots, too!