I think this is a case of “sometimes the old ways are the best ways.”

Last Tuesday, the the Rev. John McDonough passed away.  He was the third pastor of St. Sebastian.  Upon hearing the news, the seminarian staying here for the holidays and I put up these black and white mourning banners around the church building.  They looked especially jarring next to Christmas decorations. 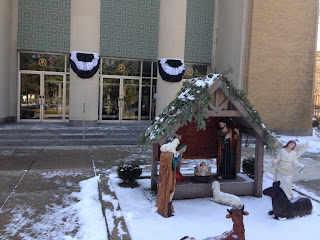 There are some who would (and did) say that these are old fashioned and melodramatic.  I think they just plain work.  It was interesting to see the number of people who parked on the street and walked up to the doors of the church to read the notice to see what they were all about.

I suppose we could have waited for the weekend and just made announcements or even send out a mass Emailing.  That would have accomplished something similar I suppose (though I would argue a little less elegantly.)  But like the manger scene that stood in front of the church reminding everybody about the season we were celebrating, the banners were a constant reminder of what the parish was noting.  Even if you did not know him (he’d been retired from the parish for about two decades), who he was and what the parish was noting could not be put out of mind be a mere hitting of the delete button on your computer.  The banners held vigil like sentinels, day and night, sun and snow, paying honor, calling for prayers.
Posted by Fr. V at 5:57:00 AM

One more reason to love St. Sebastian parish (and appreciate its pastor) from afar. Such a very Catholic gesture–one you can see and touch and loaded with symbolism.

I would think of the banners as an invitation to pray for the repose of a soul - nothing outmoded about that.