FRIDAY POTPOURRI: NOTHING TO DO WITH PIRATES 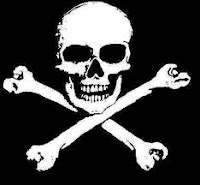 Cross. This stems from the legend that Adam’s bones were preserved by Noah (apparently there was a lot of cargo space on the ark) and handed down to the priest Melchisedech who eventually buried them in Golgotha, a name meaning, “Place of the skull.” Legend has it that Christ’s Cross was stood on top of that grave. 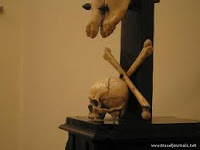 rue, that the information should make its way to us uncorrupted? I can’t send an alter server to tell the organist in the choir loft a message without it passing through several people; the altar server who in his haste only got half of the message who told the half deaf person that only got half of that message who told the person in the choir loft that was annoyed at being interrupted and didn’t really listen and who finally whispered it to the organist who couldn’t really listen because she was playing at the time.

So suppose it is completely a made up legend. Does that change anything? Does it change theology? Does it change the message and truth of the legend? What purpose is served at having to have the legend be factual as well as true (an obsession really only observed in the modern age.) So do I believe it? I say why not. It changes nothing and is much more fun and much more freeing and inspirational than having to be scientific in this instance. I can neither prove it factual or false but see that it still brings us to truth. Science will not allow us to believe it but faith will free you to do so. So I choose yes I believe it but with just enough reserve of doubt so that if science should say, “HA! You fool! See, I have proven that it only a non-factual legend,” I can say, “Okay. Fine. Thanks. But the story is still true.”
Posted by Fr. V at 7:31:00 AM

The story of Adam's bones is almost like a parable, Father.

Think about another famous story --that of "the Prodigal Son." Is it factual?? No. Is it true? Yes.

Another thing is that many pagan stories are also true in this sense. I've read one saintly christian said something like "all that is good in those myths is ours" Wasn't that Chesterton?