MONDAY DIARY: PA IS ALL WET

No, no cartoons today. Sorry. Not enough free time on Sunday to do it. But here is a story from last week all the same. This is the story of my trying to support Catholic art as I encouraged others to do last week. Fr. Pfeiffer and I had been talking for quite a spell about buying a painting of St. Sebastian for the rectory. It seemed (to us) sad that our patron was not really honored in this way.

The first step was to go on line and see what was for sale. To say the least I was not excited about what was offered out there. We were on the verge of going in on a place that reproduces great works of art for a “per square foot” commission. 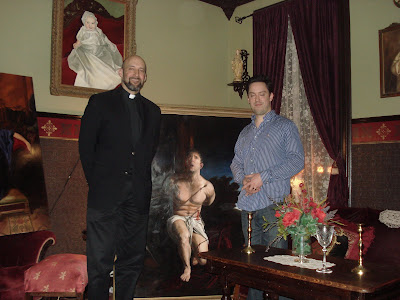 Then I found a painting by Mr. Eric Armusik on line. I was quite taken by the painting but could not afford the asking price. So I wrote to him to tell him how much I appreciated his painting though I cannot afford it. It was just great that he used his skills for the glory of God. Well, as it turned out I could afford his painting after all and so on one beautiful day last week, after hearing confessions at a neighboring parish school from early in the morning until mid afternoon, I started out for Hamburg, PA. (the next day being my day away from the parish.) I arrived there late at night and Mr. Armusik, his family, and I got to know each other and talk about faith and art. 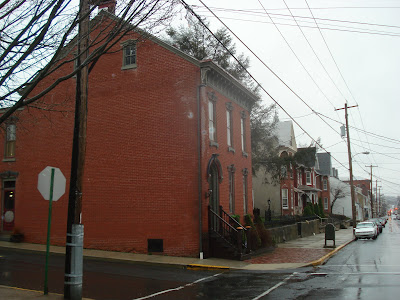 The Armusiks are a young family and very appreciative of their Catholic faith making for a wonderful evening, shocking me how late I stayed up – not being one to do so. “St. Sebastian” was brought down and unveiled and it took by breath away. I was honored to be taking it back the parish of St. Sebastian where I believe it will be properly appreciated. The problem was getting it there. Oh, the problem was getting it there.

Eric said that it would be absolutely no problem. A former boy scout and carpenter he was able to rig something up quite spectacular to the top of my car in order for me to transport Sebastian safely to Ohio. What I failed to mention was that I woke up on that Wednesday morning to snow. SNOW! I knew Ohio was expecting some on Friday at the earliest so I figured the weather would be fine that day. I was so wrong and had a sweater with me and that was about it besides a suit jacket. So I start off with snow with a work of art on top of my car. Starting down the highway my cell phone starts ringing.

“What did I forget?”

“You left your jacket here.”

As it turns out, the jacket would have been much safer in Hamburg. I pickeed it up and start off again now to rain. Rain like God was trying to use it up the rest of this year’s reserve because he was expecting next year’s to be delivered at any moment. I’m driving down the highway saying a rosary and looking up at the end and midpoint of each decade hoping that Sebastian was not moving around up there. Fortunately Eric remembered well how to tie his knots so Sebastian stayed still.

Then we (Sebastian and I) hit fog. Not early morning, “Isn’t the fog neat let’s go walk the dog in it” fog, not 1970’s “hard to see you across the bar because of the cigarette smoke” fog, but one of the 10 Plague type fogs. Driving like a 90 year old leaning over the wheel I could barely see a few yards in front of me. This went on FOR MILES. It was unwise not to pull off in the berm and just wait it out. But that seemed dangerous also. So I got behind a semi, the biggest, best lit thing to see, and stayed as far back as I could hoping that if HE hit something I could miss him and be fine.

Then the torrential rains started; the kind of rain that comes down so hard that using your windshield wipers is pretty much useless. Cars took all the available spots under bridges leaving me to keep on driving trying to see that inch behind the blade swipes that gave you a momentary view of the highway. Yes, I did think of pulling off and taking a room for the night but I would not be able to get Sebastian in and then tie him back to the car in the morning because I, unlike Eric, do not remember knot tying so well. So on we went. 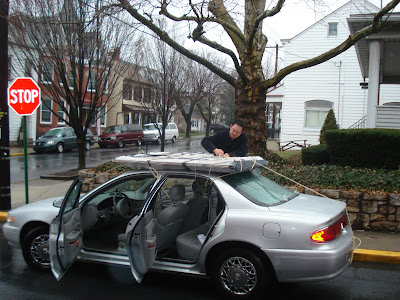 Then the, “Warning: Pooling Water” signs began appearing. It was at this point that I started figuring out that PA did not want this painting to leave it. Hitting one of these spots the car would be forced to slow and water would spray up on either side reminiscent of Moses parting the Red Sea only much less effectively. Putting my arm across the back of the seat, it was apparent that the inside of the car was soaking wet, especially my jacket that I had hanging from one of the ropes. The ropes were wicking water into the car! Of course at this point there is nothing to do but laugh.

Until the hail storm started. No, I am neither kidding nor exaggerating. Hail. Buckets of it. I felt like the tractor driver at the golf range racking up golf balls while the entire state of PA practiced their drives. I gave up hope of actually getting this painting home in on piece. Then there was this sign: “Ohio Turnpike – 9 miles.” Almost instantly the clouds parted, the sun came out, and my automatic lights went off. PA had lost and Ohio was welcoming St. Sebastian into her boarders!

Getting the painting home we hurriedly unpacked it discovering that Eric is as good at packing paintings as he is at painting and knot tying. There was a small scratch and that was about it and I look forward to him coming out to do a little touch up. In the mean time then St. Sebastian will remain in my room for me to selfishly enjoy. It was worth every soaking, PA moment!
Posted by Fr. V at 9:07:00 AM

This would have made a marvelous cartoon but I think the images your words created in my mind were an adequate replacement. "Until the hail started." Too funny and perfect. The good Lord apparently wanted to provide you with some excellent blog material. :) Thanks for taking us with you on your adventure and congratulations on the acquisition of the painting!

What a hair raising story! Can you bring St. Sebastian to church some morning so we can see him in person?

I'm from Ohio (Steubenville) and my seminary is in PA. I completely agree with your evaluation of the two states.

I'm sure we'd all like to see the painting too! It looks amazing - and what a good story to go with it.