At the end of last summer I was sitting on the porch of the rectory reading with Sebastian my dog. I man was walking down one of the parish walks a few yards from me talking on his cell phone. He could not see me because the porch was screened in and the sun was shining on it. Sebastian, however, saw him and started barking. The man was talking very loudly into his cell as some are wont to do saying, “There’s a dog at this church! What is a church doing with a dog? I never heard of a dog at a church before. What do you think about that? A dog at a church!” So I called over, “It’s because this is my house.” 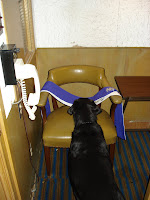 I originally got the idea of having a dog because this is a very large house. It was built to hold a number of priests and some live in help. When everyone went home at night this place got very large and it was just me and fern. The idea of a dog popped up just to have something else animate and living in the house at night – preferably not a mouse. So then came Sebastian. Then two permanent priest residents. Then two priests who rent a room from us once a week. This summer if everything works out there may be two seminarians living here too. 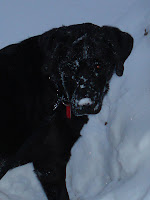 He earns his keep though. Upstairs we cannot hear the doorbell but Sebastian can – and in addition he knows which door at which the bell rang. He’s awaken me at night several times to alert us that there is a night visitor either needing help or the police who said they were checking on a (false) alarm and wanted to make sure we were sleeping alright.

There are those who would rather not have a dog around and we try to respect that as much as we can, but he does a lot of ministry also. He helps break the ice. He’s introduced me to a number of non-Catholic people in the neighborhood who have always wanted to talk to a priest but were afraid to do so. They are less afraid to talk the dog first and then be somewhat surprised that I am there too. 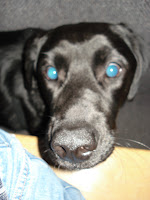 I attribute some conversions to him, some meetings that might not have taken place, keeping me exercising, and for some sense of cohesion in the parish. In that sense he is everyone’s dog. He receives visitors, mail (THIS DOG GETS MAIL!) and presents at appropriate times. I feed him less and less because of the amount of people who come to the door bearing treats. He is asked about more than how I’m doing and when I have him at the door of the church on Sunday morning, he is always greeted first and far more lavishly than I.

Sebastian IS a great dog. Oh, and we love you too.

Don't take this the wrong way, but the kids only want to accompany me on dinner drop off nights so that they can see Sebastian. They were VERY disappointed that "only" Fr. Pfeiffer was there last time.

When I was a live in caretaker at a shelter for women I had a cat...then a dog...they were the best animals that house coulda asked for. Not only were they good for the client, but they kept me going as well. I couldnt have company over as it was disrespectful to the clients, so it was good to have some furry friends. Good for you!

A few new photos of Sebastian would be welcome.

LOL! Father, I don't think you want us to pat you on the head and tell you you're such a good boy! But we're happy to do that for Sebastian. ; )

Come to think of it...do they make Roman dog collars?

The Pastor at my childhood parish/school had a dachshund. Every day at noon during the Angelus (I think that is the correct term) we were required to stop what we were doing on the playground and be silent. The dog, however, was allowed to, "sing along."