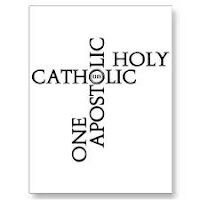 life of the Church concerning how one could know the true Church when one found it. This was the birth of the Four Marks of the True Church. You know them already. You say them every week in the Creed: “We believe in one, holy, catholic (or universal), and apostolic Church.”

Catholicity and unity are interesting aspects. In part it means to be Catholic is to be Catholic. You are never a visitor at a Catholic Mass. That is why it is patently inappropriate for the priest to ask visitors to “stand up and be welcomed by the community” just prior to Mass starting. You are not a member of a local branch church, you are the universal Church and at home at Mass, not a location. The Church is northern hemisphere and southern, it is poor and it is rich, it speaks all languages, sees al 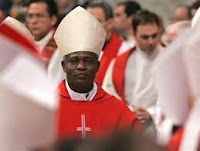 l horizons, embraces all cultures. It did so yesterday, it did so today, and it will do so tomorrow. And even if Saint Ewe-no-hoo closed tomorrow in your neighborhood, the Church would not close, it would still flourish in you and in the form that you know it though perhaps not the way it once did at that exact spot.

So in the paper a couple of days ago it was announced that a megachurch was opening close to our neighborhood. There is much excitement in that ecclesial community about their expansion into Akron. “We have become a multicultural church, one in multiple locations . . .” This branch, according to an article in the Akron Beacon Journal, is an effort on their part toward an “overall goal to become more diverse.”

I will admit that being a lifelong Catholic this type of thinking confuses me a bit. It is not so much reinventing the wheel as it is reinventing roundness but making it less encompassing. Diversity and multiculturalism is a great goal but is what is preached on Market Street going to be a unified message to what is preached in the slums of China or among the fashionable in the Riviera? If you were moved by your company would you still have a home in Kentucky or would a new search need to begin?

This may sound biting but it speaks to Christ’s message: “That they may all be one.” On the one hand it may sound noble to take my one location church and expand it so that it is more encompassing but it is an encompassing of an incredibly small universe. It may include minorities, languages, sexes, and world views, but only as they exist in the present in the Greater Cleveland area.

I do envy them the excitement they must be feeling at the moment and how wonderful it must feel to see, in some sense, God’s Word spreading. There is attractiveness in the new. It certainly sells. But will it be Christ yesterday, today, and tomorrow? Christ in Whom there is no east or west? Will it be one, holy, catholic, and apostolic? Or is it Christ sufficient for a day?
Posted by Fr. V at 4:53:00 AM

Reminds me of when my sons played hockey. When we were out of town on the weekends the non Catholic parents would say that hockey is a "Catholic sport". It didn't matter what state we were in or if we were in Canada, we had a Mass to go to on Sunday. The non Catholics had no where to go to worship.