MONDAY DIARY: STRANGERS IN THE NIGHT

Sebastian is barking like there’s a boogey man in the house. I roll 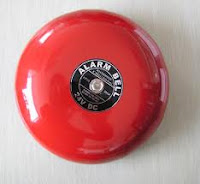 over and see my clock: 3:30AM. Sheesh. “Maybe he’ll stop and the problem will go away.” He stops barking. Then I hear a noise. I am now fully awake. I put on some clothes and start walking downstairs. This time Sebastian stays in his closet – he must figure that I am going to take care of it now - and I think, “Wait a minute. This is HIS job.” So I go pull him out of bed and make him go before me. Now he thinks it is a game and takes off barking. Somehow I already know who it is.

I wonder if there are as many people who innocently run into police officers in their pajamas as I do. Apparently one of our doors did not lock and the police came to check things out when the alarms went off. It could have been anything including the wind blowing. But I took Sebastian with me anyway to walk through the church. If anyone was in there, everyone would know about it soon.

There was nothing of note to tell you but now I was wide awake and needed to up in an hour and half to catch a plane. I was in a phase for a while of not wearing my clerics while traveling. Quite honestly they are not the most convenient clothes in which to travel these 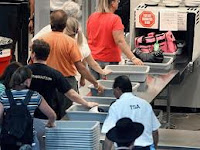 days. I prefer loose fitting, simple clothing for the strip down at the security center at the airport. About a year ago a security guy in Chicago after checking my picture ID asked with a broadening smile, “Traveling incognito Father?” So now I don’t. The slight inconvenience seems worth the witness value.

There is a certain amount of risk. You are about to sit, trapped next to someone for a couple of hours. You hope that their inclination toward the Church is at least civil of not sane. The conversation usually begins, “Excuse me, are you a Catholic priest?” Why we don’t just start saying to everyone, “Before we begin, yes, I am a Catholic priest” is beyond me.

There is the slight hold

ing of the breath for a moment until the next words come out of the other person. “How interesting,” she says, “I grew up the child of a minister!” Breathe easy.

As it turned out both she and her husband were children of Evangelical preaching fathers. She readily offered that there are “good Catholic people” and I agreed that there were one or two. She asked about how I felt being celibate and whatnot (I LOVE this! Would you ever think to a ask a random stranger how they like being married?) As it turns out however, her oldest grandchild strongly desires to become a Catholic priest. So we talked about the implications and I assured her that if God were truly calling him to this, it would be what would make him happy. She showed me his picture and I promised to say a prayer for him (maybe you could too.)

All made possible by a black band with a white block on it. Would that have happened with a polo shirt and pair of jeans. Maybe, but maybe not as likely.
Posted by Fr. V at 9:24:00 AM

My wife saw you and Fr. Pfeiffer, both in clericals, walking back to St. Sebastian's from Wallhaven nad noted that you both looked so happy, joyous and free--and handsome, she added. Wearing clericals in public, if at all possible, is a tremendous witness.
God bless you both.

Something tells me the Holy Spirit had something to do with you sitting beside her on the plane. And yes I will say a prayer.

I've only seen priests a couple times while traveling (that I know of, and I'm ASSUMING they were RC priests), never sat anywhere near me, though. I always say a prayer for them and hope they don't end up seated next to someone who will make their trip miserable! LOL (Unless, of course, God has greater plans out of that misery...)

where are you headed?

I'm proud of you, Fr V. It takes great courage to be a man and even more to represent your Faith. You and Fr P are in my daily Rosary. God bless you!

You meet the most interesting people when you travel via the air! One time, after changing planes in Atlanta, I just wanted to sleep for the final hour-plus flight to Florida. The lady next to me wanted to talk and talk and talk. I rudely put my headphones on and pretended to doze off. Imagine my horror when the next day I saw her at our company trade show sitting with my boss at a table of sales managers! Leason learned.