Of all the trends that the Catholic Church has successfully fought off is the recent trend in how things name themselves. When I was 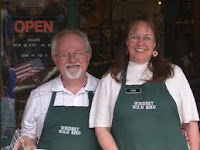 growing business took on personal names. We went to Bodner’s Drug Store to get candy, or bandages, or (yes I’m this old) to go to the tube testing machine. We knew the Bonders. Mrs. Bonder was the pharmacist. The Bonder twins led the local high school to a basketball state championship.

The Herwicks had the local flower shop. The Wiegand Family owned the Wiegand Furniture Store. Momchilov’s Meat Market and Al’s Meat Market were owned by respectively by the Momcholiv family and by a guy named Al. And while there was nobody named Marshall that owned Marshall’s Dry Goods, there was a local family that owned it that gave it a name that at least appeared knowable. (The building had been previously owned by someone with a name beginning with the letter W which was etched into the windows and when they took it over they turned the windows upside down a simply picked the name Marshall to go along with the “M” that was created.)

There seems to be a trend nowadays to make names of business seem as corporate and cold as possible. (Or is i

t just me?) I’ve had the same bank since I opened my first account back when Shep was a pup but the bank has changed names and locations at least four times. The time before last it became Society Saving Bank. I rather liked that. It sounded classy and having something to do with human beings. “Where do you keep you money?” “Oh, I keep my money at Society.” Sounds nice doesn’t it?

Now the bank that in every other way I am relatively happy with is called Key Corp. The sound grates on the ear. No longer a “saving bank” it is a corporation that can’t even bother saying the whole word. The name sounds dark, metallic, and rather authoritarian. (If that is what they are trying to put forth – bravo.)

But even they are not as bad is the recent spate of entities that wish to be known only by initials. I like shopping at the Revco which has been replaced with the cold CVS. Ma Bell and all the baby bells are now AT&T.

Not all initials are bad. But USA is often softened by the preface, “Good ole . . .” Sometimes it is a note of affection. In my hometown Saints Cyril and Methodius Parish (a mouthful of syllables) was known as Sts. C & M. It was a nickname rather than an official name such as calling Saint Joseph Parish, “Saint Joe’s.”

By and large the Catholic Church has refrained from becoming such things as, “The Route 3 Church of God,” or “SSCC INC.” We

connect our names to real people – saints – with whom we develop a relationship. Saint Sebastian and I have become great friends over the past few years. I learn more about him and try to grow in his courage and faith, something I wouldn’t quite get from a few initials and an incorporation abbreviation. There is a life, a face, a personality, a person, a saint, a connection behind (most) of our names. And that is good. Like going to the old time drug store, I have a special connection with those whose name is over the door.
Posted by Fr. V at 3:38:00 PM

Yes, in my home town we had Levy's Bakery, Fudala's drug store, Selk's "department" store etc. My parents knew many of my high school teachers. I would not have dared to "act up" in class or do less than my best, so as not to embarrass my family.

In the 1960s and 1970s, all of that began to change. People had cars and could shop at the "conglomerate" stores in the neighboring towns. Our high school consolidated with the other towns, giving me a class of 413 students for my senior year.

The personal connections are harder to make with a "big city" mentality--as you wrote about in Monday's blog.

The Church and her local parishes now provide the opportunity for connectedness that our small towns used to do.