The Eastern Orthodox Cross (a.k.a. the Byzantine, Greek Orthodox,

Macedonian, Russian, Slavic, Slavonic or Ukraine Cross) is a cross with what appear to be three cross beams on them. Starting from the top we encounter a short cross beam that is in reality a representation of the proclamation attached to the top of Christ’s Cross often symbolized by the initials INRI; IESVS NAZARENVS REX IVDAEORVM, or Jesus the Nazarene, King of the Jews. The middle beam is crossbeam upon which Jesus’ arms were nailed.

The bottom beam is the one that is the most exotic I suppose for people only used to western depictions of the Cross. Though there is no reliable historical support for the practice, many of our depictions of Christ upon the Cross show a small pedestal upon which His feet were nailed. This would help support the weight of the body extending the agony on the cross. If you ever noticed John Paul II’s cross there is no depiction of this “step” which causes His legs to splay outward unlike mor 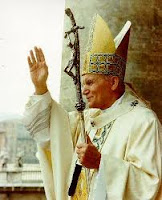 e popular depictions of the crucifixion.

What makes this cross beam unusual however is that it most often appears at a slant. There are a number of explanations for this. One is a tradition that when Jesus took His last breath this cross bar broke thus slanting it. Another says that it acts as a kind of scale of justice. The repentant thief that was crucified with Jesus went to heaven while the unrepentant went to hell. The Cross then stands as the scale of judgment by which all will be judged at the end times. Lastly it might (or also) represent part of St. Andrew’s Cross (talked about last week) who introduced the faith to the areas from which this cross comes.
Posted by Fr. V at 7:57:00 AM

i had an unssettling "feeling" after reading this blog--not because of the information,but because of the 0 comments---i have no real idea why---all that comes up for me is our Lord's aloness while on the "Cross"---i never cease to be touched, amazed,bedazzeled,humbled---what is the right desription of how i feel when this cross appears before me---i still do not know---sincerely, nancy