It’s been hard trying to figure out a way to write this post without sounding like I am whining.

Probably because I am whining.

During the priestly convocation at one of the breakout sessions it was stated that, according to a recent survey of priests in the United States, if given a choice, 73% of all priests would like a change in their living situation. 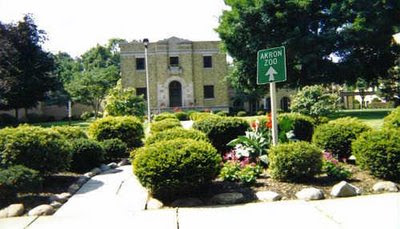 That’s a high number. Almost 3 out 4 priests have some sort of qualm with where they are living.

One of the reasons is rectories often feel like train stations. Built in the earlier part of the last century they fit the needs of the day. There was an office for the secretary, and office for the pastor, and often a shared office for the remaining clergy to use when necessary.

Then things got complicated. Ministries got complicated. Money matters got complicated. Now there needs to be an office for a business manager, a director of religious education, a youth minister, a deacon or two, an assistant office manager, a bookkeeper, and depending where you are the list can go on a bit longer not to mention that now every priest in the house needs an office – their jobs becoming more complicated and needing such a space in which to work. 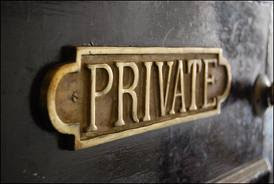 The problem is that as staffs grew, by and large buildings stayed the same. At one time just past the customary three offices there was a sign that said, ‘PRIVATE.” Past that door were the living quarters of the priests. In many places, perhaps most, the “PRIVATE” sign has been taken down and offices have moved well into the heart of the house.

At my first assignment (they have since made other arrangements) down the main corridor of the house, one side of the hallway was offices and the other side living space. It made having a “day off” extremely difficult. At the end of my first year as a priest I realized that I had forgotten to take a vacation. Being a priest was rather exciting I did not feel a need to be away. But if you do not use the time it disappears and so I decided just to take some time off one week and catch up on reading, not care too much about my appearance, and relax. It was impossible. First of all from early in the morning until late at night there are people in your house, in your kitchen (which they need to be!) and generally walking about. After two days of people saying, “I know it’s your week off but since you are here . . .” I gave up on the idea, cleaned up and went back to work. This is one reason priests disappear for days off and vacations. They are e 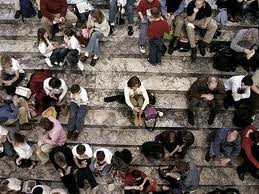 scaping their house. It is also why many buy second houses together. Where else can you relax? I remember coming home at 9PM and seeing the DRE’s light on and the car in the parking lot and thinking, “Would you PLEASE go to your own home!”

My first pastor told me one morning that he was moving an office up across from room on the second floor. We were tight on office space. That would mean the only privacy I could be sure of was if I kept my door shut and locked. So I calmly told the pastor, “You are the pastor. We will do whatever you want and I will back you. But I want you to know that if you move an office upstairs I will be moving out of the house.” It was a hollow threat but he didn’t know it.

I now live in a fantastic house. (For full disclosure - a VERY nice house.) It is riddled with offices and it makes living difficult sometimes. Today is my day away. I realized that the dog needed breakfast and so I got up, put on a bathrobe, crept down the hall, peeked around the corner, didn’t see anyone, ran to his feeding place hoping that no one would start a conversation at the stairs and block my retreat, and snuck back.

I do love it here. But the priests that visit always comment, “Nice place but I bet it’s difficult to live here.” Our bishop made mention that younger men are being sent as pastors to places because no one is applying to many places. The living situation may be one reason why. (And why I am so fortunate to be at Saint Sebastian.) Not that I would change it. For me, for now, it is Okay. If I had enough money it would not go to offices but parking lots, roofs, fixing pews, doors, sidewalks, etc., etc., etc. There is always something else needed.

So back to the thought this is a long whine. It is. Walking through Snyder Park with the dog I was told today that it used to be an Asylum for the lost; people with mental disorders, sick, dying, people with no place to go and no family – all huddled together. Bet they would have liked a change. There are bridges and woods on the other side of town that one does not go through because people LIVE there.

Kind of puts things into perspective.

I can only imagine how difficult it is to have to leave home on the one day allotted for rest. Even Sunday morning is a beehive of activity at the rectory.

Jesus apparently had the same problem. He even exhorted His disciples to come away to a deserted place.

Father: This is a very illuminating post. Our Rectory also doubles as our parish office and I never realized before now how invasive that must be to Father at times.

"...When I heard he [a priest] had his own apartment in D.C--Joe, the greatest occasion of sin in the world today is the apartment, not the parked car. Could do more good, they say, these kids, if they didn't live in rectories. Depends what you mean by good, I tell 'em. Too bad, I tell 'em, St. Francis of Assisi, and the other one, the Apostle of the Indies (they never heard of him or the Indies), didn't have their own apartments..." J.F. Powers _Wheat that Springeth Green_

I think parishes need to address the issue of housing and office space as finances allow. I'm not a fan of most of what passes for contemporary church architecture but one benefit of most newer designs is completely separate living quarters.

On the other hand the priests still need to be accessible when needed for the sacraments.

I think when vocations rebound it will help too...they'll have to kick the DRE out of the rectory in order to make room for the new young associate pastors. :)

This is probably why my pastor lives at the smaller of his two assignments, recently formalized as a cluster; the bigger place has a ton of offices and resulting activity, an auxiliary Bishop, several priests and in the summer gets a pack of college seminarians.

My Orthodox Priest friend, who was ordained in May, and his family just moved into the parish house so his life will become interesting.