There was a funeral last week of a person

whose casket was only 31 inches long. The infant child of one of our parish families died due to complications of an illness. I thank God profusely that we have a rite to follow even in situations such as these. There is comfort in knowing that the greater Church understands this event and has words to be said. But that only goes so far. The Church sets you up, provides words, a wonderful context, ceremonies to perform, but at least at one point says, “You’re on kid,” and pushes you forward to the mike, stands in the wings and says, “Say something!”

Sebastian and I went on a long walk to ponder exactly what that should be. There are things that are true but achieve little good and possibly some negative consequences in the saying. Things such as, “She is in a better place,” or “Its God’s will” bring little comfort, can be way too confusing, and brings little peace to the mourners. The last thing I would want to hear if I lost someone I loved (even Sebastian) is, “Don’t be too upset. It’s God’s will.” As if that explains anything.

That I will never have children may mean that I’ll never know some of the joys and pride of having progeny, but it also means I will never really understand what it would be like to lose an infant. I can only be in awe of the profound sorrow of the parents.

The child occupied my imagination and prayers for days. Prayer time, walks, showers; I think about that little one and wonder what she needs me to say to those still kicking around the parish.

Some difficult things arise when talking to the person at the funeral home. There a technical concerns that hadn’t crossed my mind. There was not a funeral truck small enough to hold the casket. How would we perform the rite? The pallbearers would just have to carry the casket the entire way into church instead of ceremonially walking beside it on the truck. What about a pall? What would be used? Sadly in going through our linens we discovered that we did indeed have a tiny pall and an even smaller one for urns that we did not realize we had.

So it was the day and time of the funeral and Mother Church pushed me up to the microphone in my costume and whispered loudly, “Okay. Talk now!” It would have been an error I think to try to explain anything. There is no explanation for events such as this. Instead we examined what happened, what is, and realize that sometimes things are not God’s will in the way we will to order a cup of coffee. And it may be that sometimes God needs us to cry His tears as we ask Him to do something to bring some good out of a stupid and senseless situation.

On a lighter note, the day before this I celebrated a service for my 96 year old Aunt who passed away. (Well, that certainly didn’t start off sounding light – but give it a chance.) I love my family but they do things at their own pace. The Spetiches show up early and leave on time. The Valenchecks show up late and leave after the lights are shut off. That is partly why I have so many clocks around me. I have this thing about time.

Well, my Aunt was very Valencheck and speaking with her family they talked about how she was always late for everything. And the more important the event, the later she was. So we were to meet 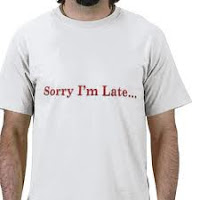 at the cemetery for a graveside service and the Valenchecks gathered relatively on time (at least for us) and we got to gabbing – and gabbing – and gabbing out on the cemetery path while the tent with the chairs sat empty. Some time later a four wheeler pulls up to the tent and starts moving things around. “They see that there are so many of us that they are making more room and bringing out chairs” I thought to myself. This was not the case however. Seeing us still standing out by our cars and chatting the workers had assumed we were finished were tearing things down. I had to jog over and exclaim, “Wait! We haven’t started yet!”

Of course they were embarrassed and apologetic as were we. Thank goodness it happened though or we might still be standing on the path taking at this very moment. And true to form, Aunt Mitz was late even getting into her grave – the more important the occasion the later she was – leaving this world the same way she lived it.
Posted by Fr. V at 7:46:00 AM

Father, you have touched my heart.

Father, I'm sorry to hear about your Aunt.

Having lost elderly relatives (some of them "cantankerous"), and also having endured the stillbirth of our first grandchild, I have reflected upon the sorrow I felt in each case. For the elders (even the "difficult" ones), our long association and myriad memories brought about one sense of loss. With our stillborn granddaughter, we grieved for the child whom we'd never had the chance to know at all.

Particularly in the case of our granddaughter, saying that she is in a better place would not have brought comfort, even though we accept this teaching by faith. You were right, Father.

Dear FR. V., Our condolences for your Aunt, God rest her soul.
Tears are running down my face as I read your post tonight. Your words are comforting, as comforting as they can be...
Today our daughter and son-in- law lost their first baby. Their hearts are broken and so are ours for our grandchild that we will never see. This loved baby was 7 weeks in the womb. Can you explain what the Church teaches about burial after a miscarriage.
Please offer a prayer for them.
Thank you and God Bless