MONDAY DIARY: ALMOST EXCRUCIATINGLY TRUE STORIES: WHAT TO DO WHEN THE SNOW FAILS TO END THE WORLD

So I guess I owe the Weather Bureau an apology.  I have grown so jaded to the threats of the end of the modern world as we know it due to an impending snow storm that I just rolled my eyes as they predicted the great snow storm of 2019. 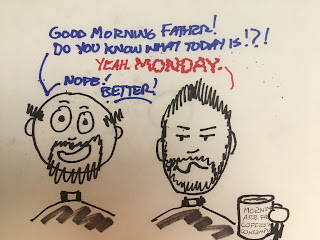 On Friday, Marcy asked if we wanted anything from the grocery store and we requested our usual; bread, milk and eggs.  A little while later she texted to say that we weren't getting ANYTHING.  People were going mad stocking up for the impending snowmageddon.  "They were out of eggs, milk and bread, carts and parking spots!  I need to go to confession." 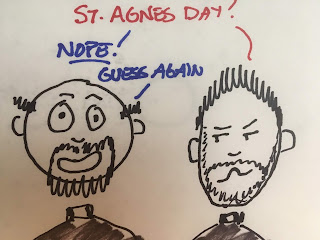 On the one hand, I suppose it is good that people are making sure they are prepared for an emergency.  But seriously, when was the last time we were trapped in our homes for more than two days even the worst storms? 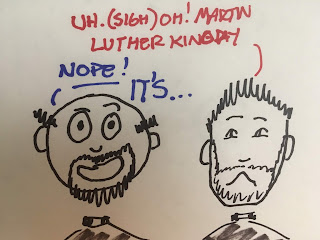 Meanwhile everybody is stuck with gallons of milk, eggs and bread. 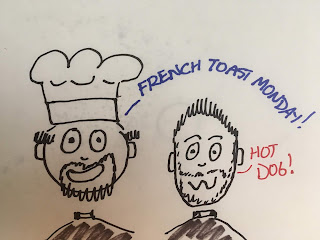 Sorry I'm missing French Toast Monday! Sounds awesome! Here in Rome it's misty drizzling rain. I like the snow better, but maybe not THAT much snow.

You will never starve with bread, milk, and eggs in the house (or potatoes, as my Irish grandmother would have said!) Sounds like a good breakfast, lunch, and dinner! Stay warm, safe, and blessed - Sue from St. B

One reference contains the following excerpt:

Hundreds of motorists abandoned stalled autos. Stuck streetcars were strung along main arteries for miles. Bus routes were littered with coaches blocked by enormous drifts. Most plants closed, and some employees who did manage to report in were marooned on their jobs. Trucks laden with food couldn't deliver. Babies were without milk, and groceries able to open were rationing it as well as bread.

Just an assurance, Fr Valencheck DID make French toast that day...you could smell the butter for miles. One request: Parishioners have requested that you post my Sunday Reflection on St Sebastian. Loving Regards in Christ