Here are just some things that I need to get out of my desk.

If you didn't hear the last Theology on the Rocks on the crusades you can hear it HERE. 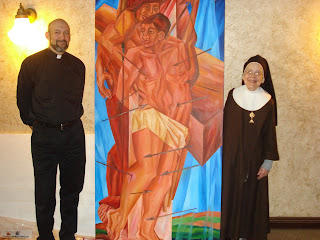 Firstly, today is the feast of the Conversion of St. Paul.  The person who created one of our St. Sebastian paintings is Mother Mary Thomas, about whom you can find more HERE.  The convent in which she lives is commonly and politically correctly called St. Paul Shrine.  It was an Episcopal church originally called St. Paul.  When the left for Cleveland Heights, the sisters bought and renamed it, "The Conversion of St. Paul Shrine."  So today is their feast day and I ask you to say a prayer for them

Today is also the feast day of St. Paul parish in south Akron.  The pastor there, the Rev. Matthew Pfeiffer was formerly a parochial vicar at St. Sebastian and still occasionally celebrates Mass here on Sunday afternoons and plays cards here every Wednesday.  He is also turning 40 (OLD) next month but don't tell him I told you and so he and his community could also use a prayer. 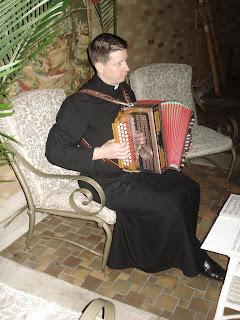 The Diocese of Cleveland has a new website.  (WAY TO GO!)  HERE it is.

Also I've been thinking about preaching on the Gillette controversy this weekend (at least in part.)  Then I found this thing below in my mailbox.  I plan on giving it a listen today and thought you might like to also:\

Christopher West and Matt Fradd (who recently started using our new Heart of the Mountain beard balm even though he doesn't have a beard – because he "loves the smell") are going to be talking about the "Gillette Controversy" that was sparked by Gillette's recent ad. We think it will be an amazing conversation about theology, culture, and the role of business in cultural commentary.
We hope you can join us (and thousands of others) for the live conversation on Facebook – tomorrow (January 25th) at 12pm EST.

CLICK HERE TO JOIN THE CONVERSATION – OR JUST TO GET A REMINDER ABOUT SO YOU WON'T FORGET
Posted by Fr. V at 6:28:00 AM

Hey!
Just to let you know, I used your "Heart of the Mountain Beard Balm" and I honestly fell in love with the smell. It really helped in grooming my beard as well.