DEAD DOES NOT ALWAYS MEAN DONE

A friend of mine called me from his new job at a Jewish school.  “We have so much to learn from them,” he informed me.  “They incorporate their heritage and even speak Hebrew in every class.” 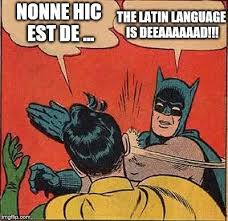 There are two problems with this.  One is, a whole heck of a lot of what makes up Western culture IS the Catholic heritage.  Secondly, our equivalent language is Latin and if you want to see people get upset, point out the documents of Vatican II (and the reiterations from the popes) that every Catholic should know his part of the Mass in Latin.

Goethe said, “Anybody who cannot draw on 3,000 years is living hand to mouth.”  Last night we prayed vespers with benediction at the parish.  It struck me that we said prayers and sang music that did, in fact, span thousands of years.  The Psalms we prayed were probably written about 1,000 years before Christ.  The Tantum Ergo was written in the 1200s.  The opening hymn was of relatively current composition.  It was mostly in English but there was also Latin and Greek.  In just 15 minutes, we were exposed to our heritage that spanned centuries and cultures. 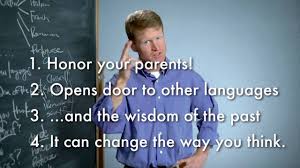 I know that Latin is definitely not liked by people I otherwise greatly respect as Catholics.  A gentleman from another parish called my office the other day incredibly upset that they used Latin during lent at his parish and he was hoping, I think, that I would commiserate with him.  He was incredulous that his pastor would not see his point of view.  Little did he know that we sing it here also.

“Can you believe it?” he asked me, “The people don’t even know what they are saying!”  I did echo his disappointment but said that how fortunate he was that he had a pastor who cared about his congregation so much that he set about changing that so that they would become familiar.  Oddly, the closest I would ever come to agreeing with him is if he said he and his congregation were all Latin scholars and simply preferred English, then I would say it was probably time to drop it. 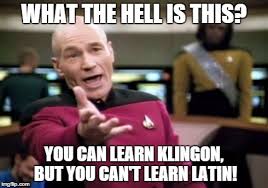 The Vatican II documents, the encouragement of the popes, the example of papal liturgies, the example of our own cathedral, all point us in the direction of at least becoming vaguely familiar with our own heritage.  (And here, I admit, I am going to be as snarky as a 3rd grade teacher)  You can’t tell me that the average Catholic cannot, after singing “Holy, holy, holy his entire life make the leap to understand that Sanctus, sanctus, sanctus means the same thing - ESPECIALLY now that our translations are superior to what they were.)

I only ever heard Catholics attacking the use of Latin.

Which is why we lost the culture war.

We can't even value our own micro-culture and we expect to be a voice in the larger culture of our country and world.

Trust me, what translation we are using at Mass (and why) doesn't help us when we are confronted by co-workers, neighbors or friends to defend our teachings on gay marriage, abortion, the male priesthood, etc.

This is the priest's area. Every priest I met is way too nice about this. You guys decide how best the Mass should be said and don't let us argue with you. We have our own areas we need to tend to, and those are rapidly decaying.

I always wonder what is going on in the minds and hearts of those who do not want even a small amount of Latin to be included in the Mass.

Do they have bad memories of a strict priest or nun that they endured during the time of the Tridentine Mass?

Did they not have access to English translations of the prayers (e.g., in a missal)?

Do they think that Protestants would refuse to embrace Roman Catholicism because of a few Latin remnants at Mass?

I just wonder why the reaction is so strident.

Latin is a dead language,
that's plain enough to see
It killed off all the Romans,
and now its killing me!

To me, the Roman Catholic faith -- not just the liturgy but the rituals, history, tradition, music, all of it -- is like a deep blue ocean of wonder. Why some people bother driving all the way to that beach and are then seemingly content to just dip their toes in, or worse yet, sit in the hot sand and bitterly complain is completely beyond me. I don't understand why more people don't get angry that any part of their heritage is being held back from them.