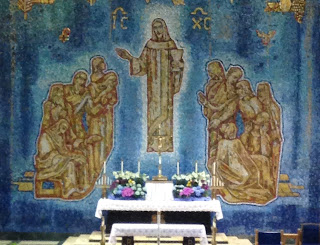 This is the mosaic in the sanctuary at St. Sebastian.  I really, really like the theological message behind it.  (This is, at least conceptually, liturgical art being used at its best.)  It is of the Last Supper.  In the center is Jesus holding the cup (chalice) of wine.  He is surrounded by his Twelve Apostles.  But though it is the Last Supper, there is no table around which they gather and there is no bread.  That is because the altar (the high altar, which was the sole altar used prior to the changes following Vatican II) IS that table around which Jesus and His Apostles gather and the Bread (Body of Christ) is what is on the altar and in the tabernacle.  The idea is to show what some people think of as a historical event is breaking in to our own day at the celebration of the Mass.  At the Mass, it is as if a curtain in time has been opened and we are present at these original events.  That is how they are relevant to us, how they include us in them.


The Mass we celebrate is part of the One Mass being offered around the world and throughout time.  This altar is the table around which Christ and His Apostles gather.  This is art making complicated, mysterious, invisible realities visible and more comprehendible.  AWESOME. 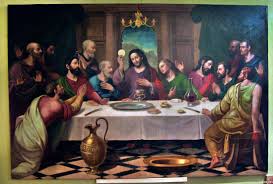 Anyhoo . . . it is this phenomena that is highlighted in paragraph 79 subsection d of the GIRM as one of the important aspects of the Eucharistic prayer (as if  you wouldn’t have figured that out yourself.)  It is so clear that it does not need much explaining.  This part of the Mass is the part that, “by the words and actions of Christ, that Sacrifice is effected which Christ Himself instituted during the Last Supper, when He offered His Body and Blood under the species of bread and wine, gave them to the Apostles to eat and drink, and leaving with the latter the command to perpetuate this same mystery.”
Posted by Fr. V at 6:51:00 AM

Is that top picture from the choir loft?

I've sat and stared at that mosaic countless times. I've concentrated and tried to send prayers at that tabernacle a ton of times. I've known what the mosaic represents around the high altar.

But that picture gives a view of that mosaic that feels very different than the one I am used to. That's really cool.

Yes it is! I'll take you up there some time