I think the St. Sebastian servers are some of the best in the diocese (Thank you Mr. F.).  If there were going to be a contest for great serving teams I'd pitch my troops against anybody's in a fair fight.  But, as with any family, there are certain things in which we are just dysfunctional.

Case in point:  SEVEN YEARS AGO I changed how we do the Gospel procession.  I made it easier and shorter.  I KNEW that it would take a while for the servers to catch on to a different routine but . . . honestly . . . SEVEN YEARS?

So I've taken to making sure, before Mass, to ask if they know EXACTLY and PRECISELY what is going on with the Gospel procession. 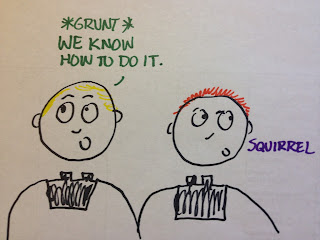 Or rather . . . some do, but JUST BECAUSE SOMEONE SAYS THEY KNOW WHAT IS GOING ON DOESN'T MEAN THAT THEY DO.  It reminds me of the car I had in seminary.  Just because it started didn't mean it was going to get you where you were going.  It might today.  It might tomorrow.  But you just never knew.

So I started going over it at EVERY MASS. 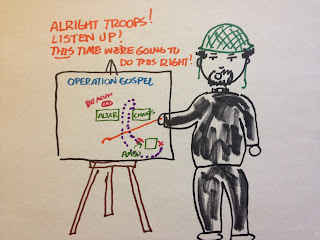 That, too, unfortunately, guarantees absolutely nothing. 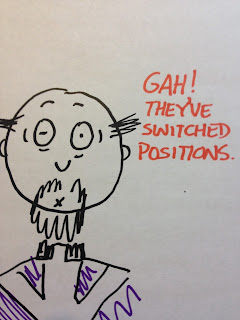 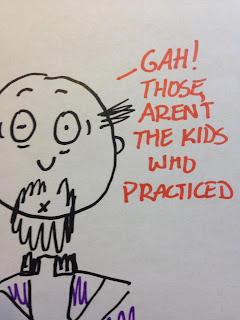 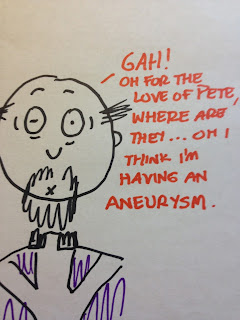 I saw you laughing yesterday when they did not walk shoulder to shoulder like you showed them. Sometimes you try your best and what ever happens, happens. Sometimes I have these problems with adults who are paid to do a certain jobs. It is harder to laugh at that point.

Instead, One would say, "Poor Father had a stroke or He's dead
BECAUSE of an aneurysm." At least you spelled aneurysm correctly.

Is this a great Church, or what?

I love being Catholic!

Mr. F: I suppose. Those kind of moments make us human, and I don't mind them happening... I'm just always torn between embracing and not wanting to embrace them. I want all of us to put our best foot forward in front of Jesus but I'm aware that smiling and little things like that are humorous and we're putting our best foot forward when we're in a good mood. I can be pretty silly and off kilter and inappropriate in the name of a smile, I just have trouble embracing mistakes in Church because I want us all to be our best. I don't know, maybe Church is passing me by when I'm thinking like this - I just can't get past it.

So.. my only way I've figured out to sort of reconcile this is approaching Mass with a different goal. My goal is to leave Church exhausted. Whether it be concentrating really hard, trying to project my prayers harder, paying more attention, absorbing the message, staying focused... etc...

I'm doing a really lousy job of hitting this goal - I want to leave Church having spent my energy, and the only time I approach it is when the kids are acting up and the baby is crying and I have to juggle 11 things AND pay attention, but I feel like I owe it to my faith to keep trying.

For many years, my 5 sons were altar boys at St.Agnes in St. Paul, MN. Sometimes military-like precision in their formations. At that time, the most senior deacon was in charge. I can't know all the secrets to his success, but they did have regular, but not excessive, mandatory practices during the school day, or just after school, or specially scheduled for Holy Week or any major feast day. The boys could earn a medal for faithful service, and had different colored cords around their necks to denote seniority, once they earned that medal. I think some keys were that there was a large pool of boys who wanted to serve, and there were a lot of large families with several boys, and thus some positive role-modeling going on. There was a trip to an amusement park or major league ball game awarded to guys who showed up regularly over the course of a year.

Here is a YouTube that my husband took a few years ago at the Midnight Mass, which really was at midnight: https://www.youtube.com/results?search_query=Midnight+Mass+at+St.+Agnes

We had to move away from the area, and our church is what I miss the most.