So as you may remember I was leaving last week to give a retreat to our third year seminarians (which for me was a lot of fun and I believe that none of them will need much therapy in the future for my efforts)  It was out in the middle of nowhere and whereas I had better phone reception there than I do in the rectory, there was no computer hook up and so I could not keep up with the blog.  (Also not a bad thing - that helped keep me focused.)
It is part of my general strategy to have my desk cleaned off before I go.  I get that from my mother who had to have the house spotless before we went on vacation.  If I get it all cleaned off, so the theory goes, then it won't be so horrible when I return. 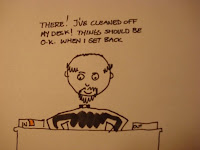 Or so I thought.  But there was one little post it note that I missed that was partially hidden from sight hanging over the side of the in box as it was.  Here is a still close up taken from the security cameras that you might have missed above. 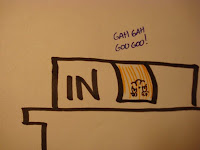 Like kittens or puppies they look so cute and innocent at this stage.  But then like bed bugs they start multiplying. 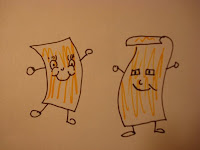 It isn't enough.  They are like the demons from Mathew 12:45, "Then it goes and takes with it seven other spirits more wicked than itself, and they go in and live there. And the final condition of that man is worse than the first. That is how it will be with this wicked generation." 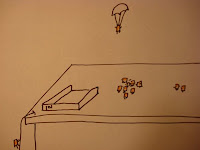 But the stick ems are only the beginning of the problem.  The mail moves in like the mafia and starts organizing the malefactors. 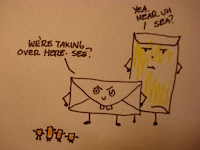 Soon they have transformed themselves into a hideous monster wreaking havoc and terror in the office. 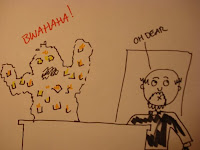 There is not to be done.  No rest for the wicked.  No time to relax and get used to being home.  The monster must be vanquished.  And it can only be won one blade of post ems at a time. 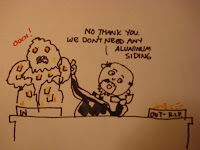 But it can be done.  It may take some time, some aspirin, and a refusal to be nice and chit chatty with people, but the enemy must be defeated before he becomes so large that he becomes unstoppable. 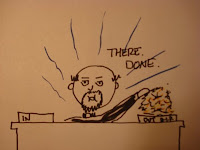 Yes.
Done.
Or so you think.
What is that blue glow behind you?
No!
Don't turn around.
Run!
Run like the dickens.
And don't look back! 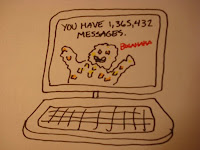 You're quite welcome, Father. I had thought that a religous blog would have something with a bit more depth to it than what I've been seeing here lately. I guess it's time to move on....

Thank you for the time you spent here in the past. God bless and may you have a fruitful search.

Thumbs down to Anon. Father, your blog is one of my favorites because it has a nice mix of material and that's what keeps me coming back.

I agree!! I Love, love, love, that my parish priest can be profound and provide great theological insights one moment, and make me laugh so hard the next moment, that I risk spilling coffee on my computer keyboard. Your talk at the confirmation meeting was fantastic by the way. It gave me a great spring board to talk to our son about Theology of the body on our way home.

I, too, think the mix of content on your blog is terrific. I'm glad to see that you don't use all your posts to lament about what a mess the world and the Church is in (even if at times such rants are fully justified) like some priests' blogs do. The mix of news, art, inspiration, challenging thought, the mundane, and humor are quite unique among spiritually-oriented blogs.

Your ability to see and depict the humor and joy in everyday life is a gift. Few in any media these days are able to elicit a laugh with good clean humor. In addition to humor, your cartoons also give us rare insights into the human side of the priesthood. I hope you are saving your cartoons. Perhaps one day you will publish them in a book?

Today's cartoon, though, I'm afraid, leads me to repentance rather than laughter! I sent you two e-mails during the week you were gone. Sorry!!! ; )

I love your blog Father and I especially love these cartoon posts.