When I was in the seminary, Bishop Pilla came to speak to the seminarians as he was wont to do from time to time. He would give us a little talk and

then open the floor for questions. This was about fifteen years ago and even then we were concerned about the upcoming priest shortage. So we asked the question, “Will we still be able to be priests to a parish or will we become sacramental machines running from church building to church building dispensing the sacraments but not really getting to know the people of each congregation?” He did say that it was not in the immediate offing but did not say that it would never happen in our lifetime.

It does happen in other dioceses. In fact it is not all that rare that a man might be ordained and almost instantly become the pastor of two or three parishes.

There was a letter to the editor today (I question some of the facts put forth but am not desirous of debating them) that put forth a solution to the priestly shortage problem and the desire of many to keep closed or closing parish from being shuttered. It was suggested that we do as the dioceses above did and simply have a priest make a circuit through town hitting each of the churches and offering the sacraments. That would certainly make s

acraments available in more spots but then it would take away from other things. There are calls for priests to be more available at the parish for phone calls and appointments, (where is Father now?!), to teach in the school and PSR, to offer adult education, (write a blog), to go to the hospital, to come to parish events and meetings, or to come to some civic event and offer the opening prayer or what have you (not to mention diocesan meetings, vacations, retreats, continuing education, day away.) Priests start to disappear off the scene the further you stretch out the priest between parishes. Every move has its consequences. As much as I wish certain parishes would remain open I am very grateful not to have to spend my day in the car running from building to building.

The interesting thing to note is that this is not a simply a Catholic problem though we mostly only hear about it from a Catholic perspective for some reason. In my home town a number of Protestant congregations have merged and/or closed. There are a couple of Protestant Churches in the vicinity of St. Sebastian that are looking to downsize and have placed their buildings on the market. The population of northeast Ohio is dropping and it is dropping for everyone, not just Catholics.

Yesterday I went to Canton to visit a closing (Lutheran?) congregation. They have a wonderful pipe organ for sale. (HEY! I can dream can’t I?) I was able to engage the pastor of the congregation in conversation and she told me that she and her assistant take care of the parish that has three separate congregations that are housed in three separate (and wo 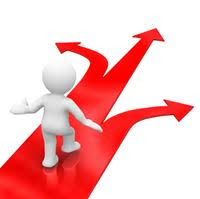 rthy) buildings, all within spitting distance of each other. On any giving Sunday she and her assistant make the rounds going to each of the sites. “I get to see each congregation a couple of times a month,” she said. This system does preserve the community to some extent, but the connection to a pastor is a bit more distant and his or her connection to the day to day goings on at the parish become more tenuous.

In the end, there is the choice of having priests available and connected or preserving a particular congregation of people. It’s a tough choice. I know what I prefer as a priest but might be inclined to think differently if I was coming at it from the other side of the altar rail so to speak. There are no easy solutions.

There is this however: to work together for the strengthening of the Church, to build up our communities, to live the faith well, to support our institutions, to speak well of the faith and of (good) priests, to make known that religious and priestly vocations are good and viable options for our young folk, and that there is nothing, NOTHING 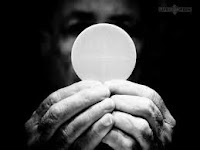 , NOTHING more important than the Eucharist. Then we are far more likely to preserve what we have and build on it for the future so that we may need never face these choices again.
Posted by Fr. V at 8:30:00 AM

Interesting perspective that is is not only the Catholic parishes facing a shortage or being attached to their buildings.

I would much rather have a priest who is not on the run, even if I had to travel a little further (assuming parishes are close together)or sit in a more crowded church.

After some of the closings in Cleveland our church is more full on Sundays. I would rather have it this way and even submit to my regular seat for many years is occupied by someone who gets there earlier than me than to have a priest split over several parishes and running back and forth.

Where are the priests that would walk 4 or 5 miles to give Communion to just one person? Doesn't matter the time we live in, no, not when we witness many priests and pastors hurrying out after Mass to play a round or two of gulf, or to meet up with friends and family around the dinner table, be it in a restaurant or a home.
One day while I was at Mass and before the pastor gave the last blessing, he says to all, "I can't wait to get out so I can buy the new Harry Potter book."
Is it a wonder we have a priest "shortage"? When many priests for whatever reason they feel justified, where no clerics representing his priestly vocation. Today, many need to reconsider why they truly joined the priesthood.
To those priests who are faithful to the Pope, who do not allow the Eucharist to be profaned, who understands and believes that only males should be altar servers, where vocations can possibly come out from.
Bottom line, the Church needs a whole new renovation of those "things" that have played a part in stripping away at the peoples' belief in the Eucharist, in the deterioration of vocations (except in the traditional orders)of too much leniancy with women in taking over the roles of what use to be the priests.
Yes, we can say, that times are different now in which we are living, this is true, but we must ask ourselves how it got this way and what we need to do to correct and make it better.
Everyday I pray for holy vocations into the priesthood and religious life; for HOLY priests.
And thanks be to God for those priests who labor and who suffer persecution rather then submit to what has become "normal" in the ways the churches are run today. It is the persecuted priests and laity who are the true defenders of the Catholic faith in obedience to the Pope.

Wow Torquemada, I mean Augustina... Clearly you are stuck on finding a way back rather than finding a way to move forward. "too much leniancy with women" seriously? It sounds like you have more in common with Mullah Omar than our Pope, perhaps you should try the Taliban, I hear they're looking new recruits.

Give a counter perspective not a derision of persons. That never wins anyone over.

Recently I made a resolution to stop commenting . . . . here is the first break . . . . I read the letter by Ms McGrath in today's BJ. It kind of made sense to me . . . . but I guess that it would sooner or later become a great burden to keep three buildings in shape

CR where are we "moving forward" to? I guess to a parallel church separate from Rome. I hope not, but many seemed determined to go there. The feminization of the Church has been talked about for years. It's no secret that one of the reasons for the Priest shortage is to attempt to justify women in the Priesthood. But, I'm sure you find that idea laughable. Being orthodox in the Catholic faith is alot different than being orthodox in the Muslim faith. It has to due with the TRUTH. Now try not to LOL. And it seems to me that you don't owe a half-hearted apology to Father, but to Augustina, but since you didn't seem to mean it anyway I guess it doesn't matter.

Well, for those who use the wordage "move forward". The reason for having a "priest shortage" is because of the lack and abuse of true Catholic teachings and Obedience to the Popes! Everyone knows that since the modernist mentality and actions of radicals from the 60's, who dismantled our churches, schools, chanceries vocations have DROPPED DRAMATICALLY. While homosexuals continued to slither their way into the seminaries. Result? child abuse, millions and millions of Our money having to pay the courts and those who were victimized. Thank God, we Now have Many men and women seeking and finding our traditions that were thrown out the window and trampled on. Just like Christ in the Eucharist! Mea Culpa!

An expat friend of mine who lives in Germany attends a church in which to all intents and purposes is run by a woman. The priest comes in to celebrate Mass and leaves. Sister tells him to jump and he asks "how high?".

When the CR's (Catholic Revolutionaries) finally get their way in this country the persecutions will begin. Oh yeah, married priests are the answer! The magazine "America" is part of the problem. I'm sure women priests and gay married priests would help too! I think I read that in the National Catholic Reporter.

NCR all but invented liberalism and are leading little ones astray --we all know this. As for the rest of the complaints, read Fr. Landry's answer to scandals ("increase your own holiness").

Way back, the Apostles decided they couldn't deal with everything in their congregations, so they nominated deacons and others to do so. An increased Diaconate also would quiet the femme-thing, which would do away with pastoral directors who are not Religious sisters. That should please everyone, all but the crowd who has to have 14 altar servers all in pleats. Delegate, delegate, delegate.