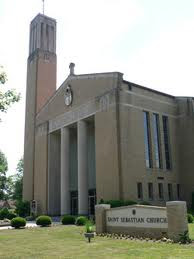 lights out at the rectory. Not only is it his last chance to stretch his legs, it allows the priests to survey the property and make sure lights are off and such. Last night we took our customary stroll and Sebastian took off which he is want to do from time to time – usually chasing a squirrel or a rabbit – when we heard one solitary bark. A single bark is unusual for him unless there are people involved – and he never barks just once.

We continue our turn around the church building and notice that the basements lights were left burning. It unnerves me because I think of Mrs. Magillacutty scraping a couple of dollars together to give to the Church and it is wasted by burning lights that nobody needs. As we head to the church Sebastian comes tearing past. “We should probably head in,” I say to Fr. Pf., “It smells as though there is a skunk in the neighborhood.”

In the basements of the church we start switching off lights when we notice the smell again. “It smells like the skunk is in the building,” we say looking at Sebastian who is sitting happily wagging his tail.

Luckily it is not bad at all. He must have just gotten the very edge of the spray and today it is even less noticeable. Hopefully dogs learn.

This past week I also had a chance to go back in time. St. Sebastian is partnering with the Magical Theater Company for a couple of projects. I worked with this company off and on for about 8 or 10 years. I hadn’t been in the theater building proper for about the past decade and half and Dennis and Holly who run the theater gave me a tour of my old stomping grounds.

We walked all through the nooks and crannies of the building that had been a combination job and clubhouse to me for so many years. I’d never experienced nostalg

ia quite like it before. The weirdest things sparked memories: A piece of sloppy masonry that I used to stare at every time I walked down the steps brought a spark of affection for the old building. Weird.

The building is almost exactly the same as it was all those years ago – and rather not. I searched in vain for something that was connected specifically to me. It is the very nature of theater – its transitory nature – that things evaporate never to be seen again. But still I was yearning to find something.

Then, in the basement, in the electric room, there was a sign, aged, curled, but still sticking to the wall – written in black and red magic marker and in surprisingly good penmanship (for me) – which read, “ATTENTION! Use no broom in this room! Sensitive electrical equipment!” And there it was! Evidence of me and a former life. It was enough! Thank goodness that tape lasted these few decades.
Posted by Fr. V at 6:41:00 AM

If the odor persists, esp. on a rainy day, you may wish to try this one:

ooh great! I have all of these ingredients in the house! (We don;t drink tomatoe juice) THANK YOU

Oh no. First Sean's dog, now Sebastian. Is Baxter's time coming? Sean used the ingredients that anon posted and it worked quite well, although Sean did have to take his dog to a professional groomer since Lexie took a direct hit and they couldn't get the smell completely out of her face.

As a chemist I can say that the mixture that anon left should work great! From personal experience (!), I can it definitely works.

Tomato juice doesn't work - and is way more expensive than this handy solution.

I'd keep those chemicals handy, Father; among God's creatures, about the only one dumber than a black lab is a moose.

I was also told by the vet's office that Dove dish soap works as it cuts the oil that is the skunk spray. Our black lab took off after a skunk one night and didn't fare as well as good Sebastian - he got a face full of it.

As I'm running around the side of the house to tell my wife to not let in the dog who is by the back door sneezing, snorting and foaming I see ... big black dog making a beeline from the now open back door up the stairs and into my bedroom. It took days to get that smell out of the house.