Sorry for the hiatus. Thanks for coming back.

I was off to celebrate a funeral for my Uncle Louie. He is

in all actuality Catholic though his family is not, but they graciously offered to let me have a funeral home service for him and then they will come to St. Sebastian this summer and we will have a Mass.

So, I drove out to Chicago, a plane trip being too time consuming and degrading to warrant spending the amount of money it would cost. A traveler’s survivor sack was packed with water, snacks, change for the MANY toll booths, and an audio course to review the history of the crusades in order to be better informed for the Chesterton Society meeting that would take place Sunday.

Still in Akron I hit a traffic jam almost as bad as the ones that would be faced in Chicago. An “EXTRA WIDE LOAD” was too wide to fit through a construction zone and got caught up on the cement barriers. Then, horror of horrors, the two thirds of the audio course were missing from their jackets! Arg! Well, at least I got to review the last third of the crusades.

I arrived at midday at the Margarita Inn which was built in the 1920’s by the Catholic Church to house single women who came to the city to work and needed a safe place to stay. Now it has a second life as a “European” (read: no bathrooms en suite) bed and breakfast. But it is a charming, five sto 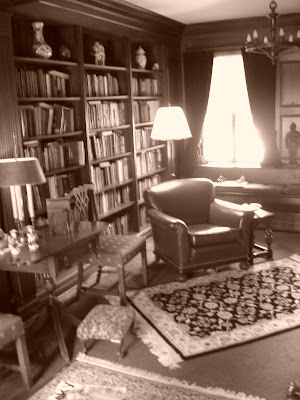 ry, elegant place with wood paneled library, roof garden, and a common room with oriental rugs and wing backed chairs where breakfast is offered. There not much to give the impression that it is anything but the 1920s there still save for the way people dress and the computer behind the check in desk. Checking in I was warmly greeted by the lovely lady who has worked there for as long as I have been staying there who make me feel like I am the most important person who stays there. She handed me my key (a key! – not a card!) and messages from my family. (Who gets messages at the front desk anymore? You see? I was in heaven.) 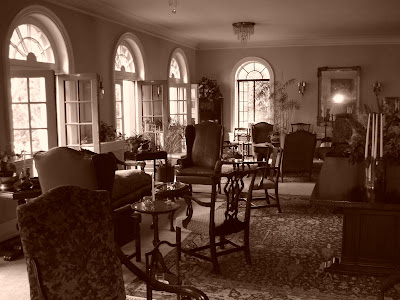 For calling hours I gathered the cousins that were on our side of town and drove to the funeral home. Oh! The traffic! I’ll never complain about Akron traffic again! After some time there I took my uncle’s wife and children to a private room to plan a service. Thank goodness the Catholic Church has a rit

ual and prayers to say so I did not have to spend a tremendous amount of time making a form up and then trying to figure out what the prayers should say.

We talked about Louie for in fact I did not know him intimately. He had moved to Chicago even before I was born which meant we got together for holidays, weddings, funerals, parties, (and ordinations.) He met my Aunt Jan in Chicago. He had lied about his age in order to get into the air force during WWII. (My Dad did the same thing. Must be something about Slovenian men.) He went to buy cigarettes at the Walmart and his future wife refused to sell them to him because we was too young. He threw the pack at her and stormed out. After cooling down he started to feel poorly and so went back, apologized, and asked for a date – which he got – and so began our family’s branch in Chicago.

Back at the Inn I gather my notes, the readings, some paper and a pen and head off to the library to sit in my favorite chair and think about a homily. Starting is always the most difficult part exacerbated by the lateness of the hour. One attempt is started and the discarded. The pen hovers over the paper. What would I want to hear? A line comes that I have used before but want to use again, “Today is a day of hope . . .” and from there the ink flows from the pen onto the yellow stick’m notes. Despite the long hours of the next day, the drive back across town, leading services at the funeral home and the graveyard, the seven hour drive home, the most difficult part is now over, and I go up to my room and fall into a deep sleep.

I can say that these are one of the impressive snaps I have ever seen in my entire life. Even I like the way you have presented the post with us.

I am sorry for your loss. When someone dies, it is Heaven calling. We must put down our chores and go.

Father,I am in the Chicago area now . . . am writing this comment while at our daughter Teresa's home in Schaumburg . . . . looked up the Margarita Inn on the web . . . found that it is in Evanston . . . am familiar with Evanston because Teresa attended Northwestern University and lived in Evanston for several years after graduation and marriage . . . . . May Uncle Louie rest in peace.

Sorry for your loss, Father. I hope you made it home OK.

Death of one person takes a little from everyone is the family. At this time life seems to be upsetting and it seems that things will never go right again.