This coming weekend Bishop Lennon will be arriving to Akron to have the final parish Mass at Saint Mary on South Main Street in Akron. One hates to see any parish close for any reason but such things happen. This one is particularly sad because the building is, IMHO, one of the most architecturally significant buildings in the diocese. Unfortunately the Catholic neighborhood around it has shrunk to a considerable extent and so this is the result. I hope that those of you who could were able to stop by and see the church before it closed (or will see it this weekend.) Interestingly enough the school will remain open. (There is a large nin-Catholic community that it serves.)

Previously on A.A. we had a tour of the exterior of the building, a limited tour of the interior, and had a trip of the bell tower. Today there is one more tour to be taken: Through the tunnels underneath the parish buildings!

Fr. B. was kind enough to take some time out of his busy schedule give Fr. Pf. and me a little trip through these seldom seen places. I remember once the 8th grade boys at my first assignment wanting to see what the basement of the church looked like. It was small, neat, and largely empty and they were deeply disappointed. They would not have been at Saint Mary!

Opening the door in the basement of the school we entered a tunnel. I could easily stand in it (I don’t know if you could tell from this first picture) and it led us to the large room underneath the plaza between the church and school. 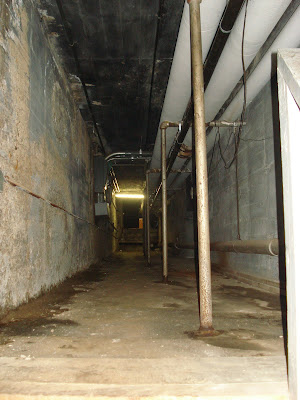 This picture does not do this room justice. It once housed giant boilers and coal bins but is now replaced with a much more efficient heating system that takes up a fraction of the space. The room is quite large and very high. It could be a small ball room except that it is a basement! Two new, large, cement pillars were erected in the middle of it to shore up the plaza above. 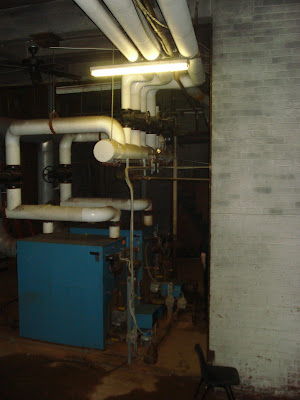 We next passed underneath the church. You can get an idea of the size of the tunnels from seeing Fr. Pf and Fr. B ahead of me turning on the lights. 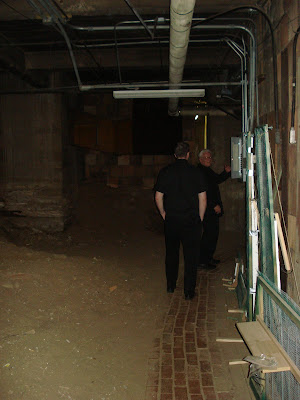 The wall in the background is actually a large semi-circle. It follows the shape of the apse. The pillar is there to help support the great weight of the high altar. 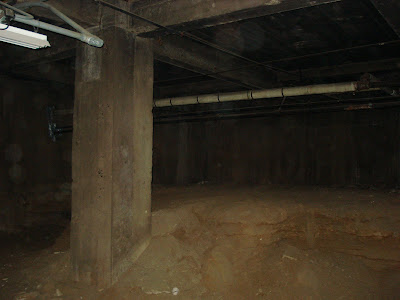 These tunnels wind around under the nave of the church. A few years ago a University of Akron cinema student used these tunnels in a movie about the seven deadly sins. Apparently this was hell. Who knew that hell had incandescent light bulbs? 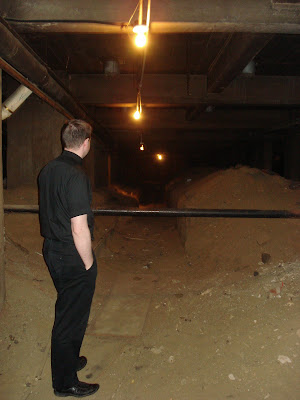 These are the cold air returns. If you look above you can see what appears to be coffee cans handing down from the ceiling. If you look up you can see this grate, which would be in the floor or the nave, and see into the church. Here you can get a glimpse of a stained glass window in the clerestory from the basement. 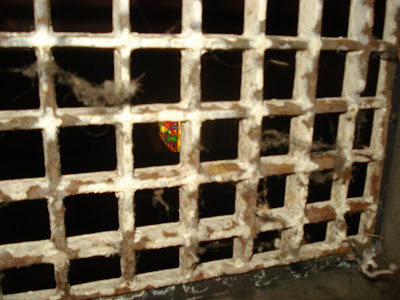 Legend has it that once a lady dropped a particularly valuable ring down one of these vents and it was never found. People have searched for it to this very day (I admit, I kept an eye out.) Determined persons with metal detectors have made the rounds and came away with rings and other interesting objects that have fallen through the grates over the years but the ring was never found.
I found a marble.
Posted by Fr. V at 7:00:00 AM