TUESDAY QUOTE OF THE WEEK CVI

FINDING TRUTH WHEREVER IT MAY BE FOUND: "Mere intolerance, in itself, is not

wrong. It is when a truly terrible event occurs or an untruth comes to light, and we are told we must accept it in the name of tolerance, that something has gone wrong." Maria McDonald "In Defence of Intolerance

QUOTE II: "In the wild recesses of our imaginations could we conceive of not working forty hours a week? I think that is within the imaginative power of most Americans, but what about this: can we imagine what we would do with our free time?" Andrew Hornde "Foreigners"

Thank you to all of you bloggers who helped make "Old Thunder" a success at Saint Sebastian. Polling a few people who were from outside the parish they largely said that they found a reference to the show from blogs rather than any other advertising. God bless you. 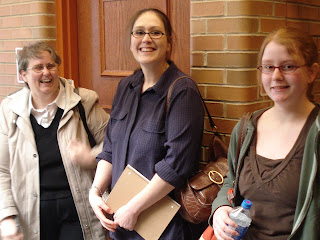 Of course Ellen was there with members of the Warren Chesterton Society. They were responsible for starting the ball rolling. 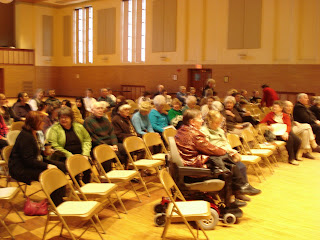 We even had a literary society from Saint Mary, a local Anglo-Catholic Church (I hope I put that correctly). M. A. from that group reports that they who found out about it from The Distributist Review. (Distributism being a pet idea of Chesterton who was good friends with Belloc.) 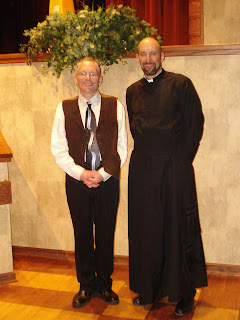 Kevin O'Brien and his crew did an excellent job and I highly recommend them. If you would like to read a post about their experience in Akron (although we are not a suburb but a happy city all on our own) read here in the Saint Austin Review blog which is dedicated to reclaiming culture. Once again, here is the Theater of the Word site.

A.W. sent a wire concerning a new movie coming out called, "Come What May: When Does Life Really Begin. If you go here you can see a trailer. This is all that I know about it but if the trailer holds true it looks promising in content. Has anybody any further information?

ocese of Cleveland Enewsletter is providing a link so that you can read the individual letters sent out to parishes this past weekend concerning directives given to them concerning the results of the Vibrant Parish Life initiative. For those who are unfamiliar this past weekend this diocese announce that over 50 parishes and schools would be closed or merged. Other parishes received direction on how to strengthen their presence and ministry. These are the letters sent to each parish.

From the same source, "Did you know, at the time, the field of St. Patrick's labors was the most remote part of the then known world?" Read more here.

Or you could just watch this:

J. pointed out this gem of news from the Little Black Book. You may have heard the song, "In heaven there is no beer . . ." That would be changed if Saint Brigid of Ireland had her way. "I would like a great lake of beer for the King if Kings: I would like the people of heave

n to be drinking it through time eternal." What a saint. Beer was the safest, most nutritious drink for northern Europeans during the Middle Ages. Many monasteries brewed their own beer which they called liquid bread. Priests are called on to bless the hops on Saint Joseph Day (March 19th) to make sure that the beer turns out well. Catholics know how to fast, but we also know how to enjoy creation. Here is the Catholic Beer Review that I found on accident. Even better, here is a history of the Church and beer.

Jay said to tell you that Catholic Carnival 215 is now open to the public!

Why did Saint Patrick drive the snakes out of Ireland? Because it was too expensive to fly!
Posted by Fr. V at 6:57:00 PM