CAN'T I HAVE MY CAKE AND EAT IT TOO?

Which side do you think the ACLU will come down on?

In an interesting case of separation of Church and state the Cleveland Plain Dealer reported this past week that members of city council want to put a stop to the Church's plan to do what it wants with its own property. What I find most interesting (and telling) is that NOBODY finds this the least bit provocative. Here are some interesting lines:
"'I'm not about to lose these churches to the wrecking ball,' said Councilman Mike Polentsek."

rch law (emphasis added) Tayek has said that sacred artifacts, including stained-glass windows, will be removed from the churches . . ."

"That could spark a showdown between church law and city law."

"I would fight anybody who wanted to take those windows out." Attributed to Councilwoman Dona Brady.
"Councilman Jay Westbrook said stripping churches of artifacts and architectural features diminishes the building's value, making it harder to sell."
"If the diocese is going to make closing announcements and just let the community suffer the consequences, it will require us to enact stricter legislation." (Emphasis added)
I hope you see the double standard being applied in the modern and spurious "Separation of Church and State" debate. The sad part is that I hope they win and find a foundation with a billion dollars to keep the Churches open as historical monuments. But that won't happen.
Many years ago my home parish was sold. The new church was build down the road and the old church sold with an agreement that we could come back and take the pipe organ which never happened. I went to the minister of the parish and offered to by the organ for the loft had been turned into a bookstore and there were shelves drilled into the cabinets containing the pipes. "It adds to the value of the building," I was told. Two additional years later I revisited the church to find the organ gone. It was given to somebody who had it in their garage.
Just how protected would the church artifacts be if left to the city? What would prevent eventual resales from having windows end up in fashionable pubs, confessionals turned into phone booths (Oh, that's right, we don't have phone booths anymore) or pews turned into restaurant booths? Will a historic designation mean there will be money available in an already cash strapped city to preserve them? I'll give you a hint: The answer is no. 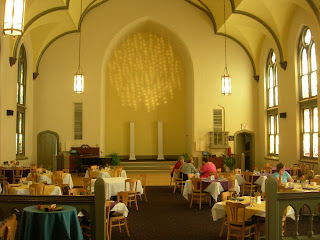 I am terribly sad that these things are happening. Some of my favorite places are in danger of closing. I would give a lot for them to stay open and intact in some fashion. But where were those who are trying to enact governmental laws to stop the Church from exercising her right

s when we were in trouble all these many years? Did they come to Mass? Did they promote going to Church? Did they call people back to the parishes from the suburbs? Did they provide funds to keep the places going? No.

If course not. That would be a violation of the separation of Church and state.
Posted by Fr. V at 2:24:00 PM

Wow. My issue is the infringement on private property rights. Why should city council be able to impact changes that any property owner wants to make, as long as they are following building codes and ordinances? There are all kinds of changes that individuals make to their homes that increase or decrease the value of their property. I may not agree with their changes, but I strongly believe they have the right to make them.

Yesterday on EWTN, Fr. Mitch Pacwa reminded us that church buildings are built mainly by the contributions of the laity. So, we laity have a legitimate role in defending the Church's right to do with those buildings as She sees fit.

Interstingly enough, most of the people fighting this are not even Catholic

I should add - in this article - the Catholic populace was not the topic here. But I get your point.

Very interesting how the city council will use the 'separation of Church & state' to keep anything 'church' out of the classrooms; yet when we, the Church, tries to do something with our OWN land, they site the same ruling against us ...
they can't have it both ways.

Give us back prayer, religion, etc. in schools & we'll sell you our buildings.

Thanks Father V. I felt the same way when I read the article in newspaper.