TUESDAY QUOTE OF THE WEEK - CV

FINDING TRUTH WHEREVER IT MAY BE FOUND - "Never become dupes of your own learning. In this life our knowledge will always be imperfect." Blessed Columba Marmion

QUOTE II - "We have a great capacity for believing lies and illusions." Fr. Gene Fulton

Just what kind of Catholic are you anyway? You can find out what beliefnet thinks of you anyway by taking this QUIZ.

I. E. sent this in, "WASHINGTON—The U..S. Conference of Catholic Bishops (USCCB) has launched an e-mail campaign urging Congress to maintain widely-supported pro-life policies and to oppose the federal funding and promotion of abortion. The e-mail campaign augments the massive national postcard campaign launched in dioceses throughout the country in late January. Both efforts are being coordinated through the USCCB’s partner organization, the National Committee for a Human Life Amendment (NCHLA)." For more information look here.
Just so you know, Gus sent this in, "Irondale, AL (EWTN) – EWTN Global Catholic Network will provide live coverage of the Pope’s visit to Cameroon and Angola March 17 to March 23."
Ladies and Gentlemen, it is my honor to tell you that Catholic Carnival 214 is ready for your perusal.
PICTURES ON PARADE
My sister and I ascended to the 1928 bell tower over the school this past week to have refreshments and watch the sun set. The view is not as wonderful as the 1958 tower over the new church but it will do in a pinch. 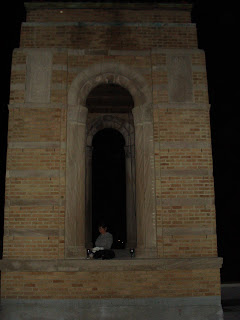 As we were coming down this view presented itself. It seemed so serene it was captured and shared here with you. 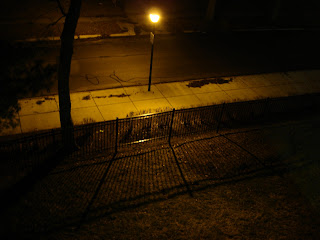 Well, having Sebastian around is proving to be a good thing. One of the best advantages of having him around is that he makes me go outside from time to time. This past Sunday we went for a walk in the rain just as the sun was preparing to go hide out below the horizon. The light was so amazing that I wanted to run in and get the camera. So the debate began: If I ran in and got my camera would it have passed and I miss it all? Was this just meant to be enjoyed in the moment and nothing "done" with it. Well, running and getting the camera won out. By the time I got back out to the street the light had changed but just into something else interesting. Enjoy. 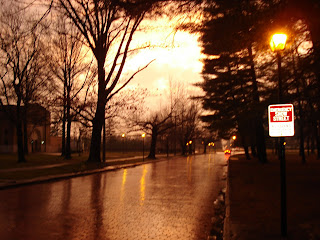 This next picture looks like a 1950s postcard with the colors exaggerated to make the scene look better but in reality it just looks someone colored the pictures with too-bright colors. But this is the way the church looked yesterday. 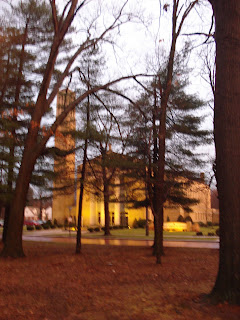 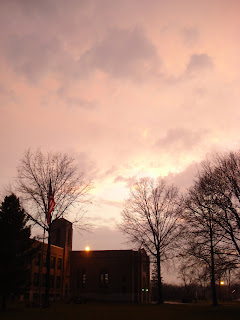 in "the National Committee for a Human Life Amendment (NCHLA). For more information look here." , the link doesn't work.

Thanks for the heads up Foxie. It should work now.