Seasons also have flowers associated with them. Advent tends to be 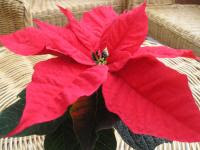 a time that we do not decorate and so we begin with Christmas. The most obvious flower associated with Christmas is the poinsettia. But believe it or not, this is a relatively new addition to the symbolic vocabulary. It seems so incredibly entrenched that it is hard to imagine the altar not having them in abundance (thanks in large part to commercial growers and promoters.) In fact, it is not listed in older liturgical symbolic dictionaries. So here is evidence of something nice being introduced and the Church baptizing it and assigning symbolic value to it. The flower somewhat resembles a star which makes one think of the Star of Bethlehem. Some assign meaning to the various colors in which this plant comes but I find that risky since there is no universal agreement and the colors vary so greatly. But red is often associated with His humanity or the Blood which He would shed 33 years later. White brings to mind purity. But pink and mixed colors are kind of on their own.

You will find the almond associated with the birth of Christ. It symbolizes divine favor or approval. The symbol comes to us from Numbers 17;1-8, in which Aaron was chosen

as high priest b

y God because his staff burst into bloom. “. . . and behold the rod of Aaron of the house of Levi was budded, and brought forth buds and bloomed blossoms and yielded almonds.” This then became a symbol of the Blessed Virgin. She appears in a Mandorla or Almond aureole, a shape made when two circles intercept each other, usually in depictions of the Assumption. This shows the divine favor bestowed upon her that derives from her being chosen to be the Mother of God hence, the appropriateness of use in art and decoration of using the almond not and branch.

Once again the daisy comes into use. It symbolizes the innocence of the Christ Child an

d considered more appropriate than the tall stately lily to exemplify his humility.
Posted by Fr. V at 2:12:00 PM

One could say I am rather unfond of poinsettias. No matter what is said to the contrary about their origin, I am sure they first sprang up at an alien crash site somewhere in the desert. They've been done to death-- not least of all in churches. Christmas upon Christmas, our parish sends out the same card with the Seasons' Masses-- THE photo of red poinsettias around our altar that Pete took way back when he was a young man. I've taken to drawing mustaches on them. Every Epiphany we are urged to take these languishing plants home from the parish hall lest they die. (Oh, the horror!) There is one in our bedroom window right now, still growing like crazy, tho' only the green leaves. (Husband cannot resist anything free, be it a Saab-sized head of cabbage, or a completely unfixable yet almost historic rowboat.) I am not traditionally Traditional which may be the bigger problem--the first time he brought home both poinsettia plant AND eggnog during Advent, I sat right down to the sewing machine and whipped up a Donna Reed apron, then curled my hair very curlily, and called him by his father's name all evening.

But all this is just leading up to what I really wanted to say, which is that I love the Mandorla. It's beautiful, and I love the concept it is based on.