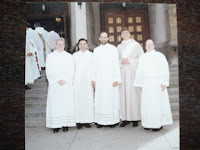 After the long line of priests and deacons we fell into line in the procession around the Cathedral. The bells in the tower rang out their joy and we could spot people standing in their windows in the hotel across the street gazing on the scene below them. I’ve often wondered what they may have been in town for and what they made of the procession.

There were also people just going about their business downtown walking down the street or staring through car and bus windows. There were of course the protesters. First we passed the man who gathered with his family every year who held up signs such as, “St. Peter was a married man,” or “My Dad is priest”. I remarked in my journal my surprise at how tall his sons looked. The only time I had contact with this family was when they would protest at ordination over the past six or 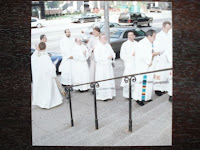 seven years and it was always a shock to see how they aged. Rounding the corner we ran into the second set of protesters making a case for women’s ordination by holding up a long sign that states, “Women are priestly people too.”

We had our picture taken and then we started up the steps into the Cathedral; the music from the pipe organ and small orchestra wafting out onto 9th street. It was packed and the singing loud and joyous. Flashes went off from the congregation and there were calls as family, friends, and parishioners called out our names and waved letting us know that they were there. The class bowed to the altar and then divided and went to our designated chairs in front of the pews. Our families sat directly behind us and I got a glimpse of their faces with their emotions so complicated it was difficult to exactly what they were.

We executed our roles well though I must admit in taking joy in having a last name that began with the letter “V” as it afforded me opportunity to correct any possible mistakes I might have made by observing my brothers. When it came time for the Litany of the Saints we laid prostrate on the marble floor while the people stood and sang. We were warned before hand not only to polish our shoes but to make sure we did the bottoms as well for just such times. (Funny little details.)

Some things come to mind that are so utter un-profound that it is almost an embarrassment to report them. One of those came at this moment. Laying there with my face an inch from the floor I remember marking that the floor was so shiny that I could make out the chandelier in the ceiling in detail. But on the other hand, I had never been so moved by hearing all of th 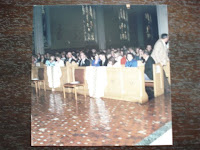 e saint’s names before. For the first time (and it is a shame that I had to wait until ordination to realize it) I heard those names as my actual and living brothers and sisters, not merely a hypothetical or even just a remembrance of the great ones that went before us. “Pray for us!” was not a nice thought but as true a request as asking my blood sister to help me move my things to my new assignment.

Fr. Kunkle, the pastor of my home parish, vested me in my priestly garb. He seemed to me down during the week but later I learned that he was ill and needing surgery but put it off until after ordination.

We always forget about the protesters, don't we? *sigh.. Suggest to the Bishop that perhaps there should be a contingent of Catholic Harpo Marx's working the sidewalk during the new priests' procession into the Church. I can easily see each one grabbing a protester's arm and hanging a leg on them, thereby making one's (even sillier) sign drop.

I know at least one Catholic Harpo who'd work for free on that grand day which is celebrated in Heaven as well as on earth.

I admire the Marcin family for their dedication, and for faithfully reminding us year after year that the imposition of manditory celibacy upon the diocesan priesthood is a disciplinary matter that is readily changable. Unlike the restriction of presbyteral orders to men only, which some have declared to be a domatic principle, the ordination of married men has a long history in the Church, in fact there are many (around 100 or so) married Roman Catholic priests in the U.S. right now. Phil and his wonderful family give witness to the reality that there are thousands of priests in the U.S. who are unable to serve because they have prayerfully come to the consientious self realisation that "it is not good for the man to be alone." Their gifts and talents have been squandered, and this loss is felt all the more with the dwindling numbers of active Catholic priests. Phil and his family have dedicated their lives in service to the hungry and poor, and render a powerful ministry in our diocese. That he is no longer permitted to minister at the altar is a great loss to the church, and has made us all a good deal poorer.

Respectfully every man going for ordination knows the discipline required before even entering seminary. The time for the decision about marriage is PRIOR to receiving Holy Orders not after it, even in the Eastern Orthodox churches and even for those who fall under the pastoral provision.

Kat, right, the tradition/history is for the ordinination of married men, not the marriage of ordained males preists, that's pretty clear, and your right in daying that imposed celibacy is a discipline and not essential to presbyteral orders. The thousands of preists to whom I referred are ALREADY ordained, hence restoring their faculties does not present a problems; also with regard to the discipline, just as readily as it was imposed it could be relaxed.

Well, there IS that little problem of disobedience, breaking vows, etc. The Church owes these men nothing; these men chose to leave of their own accord knowing full well the Church's position on the subject.

As a fellow sinner, I have sympathy for their also-fallen natures. But also as a sinner, I have learned the value of obedience and the reality of a theological institution that does not follow the fickle whims of the world.

God bless them, but let them accept the consequences of their own decisions and leave the rest of us alone to be obedient in peace.

Who are these people you speak of here: "the Faithful being deprived of the sacraments because we don't accept the ministry of married men"???

Are there people who have no access to sacraments right now but WOULD if Catholic priests were allowed to marry? Where are they and how many are they?