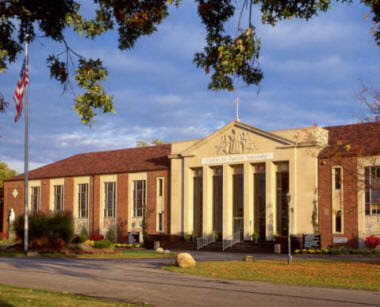 I warn those who are going to be ordained to write everything down because you will forget. That had to be admitted even in the writing in my journal ten years ago. “There is too much to even try to remember and so I will give snippets of things that are standing out even now,” I wrote.

Ordination morning started bright and early in my room at the seminary. I was in an older part of the building with dark wood doors, high ceilings, and thick plaster walls. The rooms were just large enough for a bed, a desk, a chair, a bookcase, a closet and a sink. The closets in the older sections were considerably smaller than in the newer (they were once nun’s cells) but the woodwork a better sound proofing more than made up for that inconvenience.

I prayed the Liturgy of the Office, dressed in my finest black suit, packed up the things that I would need for the rest of the day and headed off for ordination. I was driving my Uncle Leo’s Grand Am. He had been my confirmation sponsor but had died a few years back and so it way of having him with me in a way. In any event it beat the 1979 Ford LTD that I had been driving – an auto junkyard on wheels – such is the curse of being a seminarian at times. Actually it was beautiful on the inside with a front seat as big as a davenport, but the outside had quite seen its day and every few days it was necessary to pull over and break off whatever had been dragging along the road.

After parking in the cathedral garage the walk was made to the chancery building. On the way I saw my family, Mom and Dad, sisters and nephews in a coffee shop and popped in to greet them. They were so excited and a bit nervous themselves.

We met in the bishop’s parlor. It was early but Bishop Pilla was already dressed and so we felt obliged to do so also. This was the year right after Bishop Pilla had major heart surgery and he was a bit pale but able to joke with us and recap with us what we were to do that morning.

The bells started peeling in the bell tower about fifteen minutes early. The class gathered to pray and to dedicate ourselves once again to the patronage of the Blessed Virgin. The Bishop signaled us over and

prayed with us one last time and we were sent to line up “under the arch”, a large passage that allowed cars to pass into the heart of Cathedral Square that connected the cathedral to the chancery building. Traditionally this is where the bishops and main celebrants line up while the rest of the priests and deacons line up along East 9th street. For the first time we were lined up under the arch on this beautiful, sunny, Saturday morning. Bells still peeling in the tower above our heads, the crucifer started his journey down East 9th Street, turned right at the corner up Superior Avenue, and finally into the door of St. John the Evangelist Cathedral.
Posted by Fr. V at 1:01:00 PM

my mother refers to the couch/sofa as a davenport. She is of German ancestry and was born, raised and lived all her life in St. Paul, MN. must be a Midwest thing.

Fr. V., ~ HEY! I used to drive a car like that, too! Pieces used to fall off while I drove down the highway, and I'd wonder if it was something necessary or important. I also prayed that I wouldn't get into an accident, because the entire car would turn into dust and I'd be left sitting in the seat holding a steering wheel wondering why my windows had all just fallen to the ground and shattered. And where that breeze came from?

Seriously, great post. It's awesome you wrote these things down; what incredible memories, and you're making us feel like we were there, too. :-)

Kevin ~ I live in Minnesota, and I've never ONCE heard someone here use the term "davenport" unless referring to a city in Iowa. I first learned that word when I was 6 or so, at a babysitter's house in Illinois. She kept telling my brother and I to "go sit on the davenport." We had NO IDEA what it was and because she was a very severe person, we were terrified of sitting on something wrong and we were also terrified to ask. LOL! So it wasn't common in Illinois, either.

Adoro, ROFL! I'll bet you and your brother still chuckle about the davenport moment to this day.

And I still have a car like that, or more precisely, husband's van (same man who has a wooden lawnmower..) I drove the big blue beast home from Mass one Sunday morn-- ladders creaking atop, groans coming from within, crashes of nails and boards just behind my right ear when taking corners (even slowly), but the best part was how one door would fly open on one turn, and the other one on the opposite turn. If I accelerated beyond the merest tap, the back door flew open. (It was not MY way to bungee cord myself into the thing, as was so for a nameless other.) It seemed little birds were swooping and darting about for a good half-mile--perhaps they needed the chuckle, but they completed the picture: Here comes Cinderella from Heck. Or so I'd thought, until a couple years later when I ran over the muffler. Twice. On the railroad tracks. In the snow. (No, not uphill..)

That Grand Am wasn't from Uncle Leo, Fr. V.-- it was from God.
:-) Anyway, is it just my old eyes, or is the flag in the first photo at half-mast? I'm glad you wrote down things; for others, it's like being there.

My grandmother always called it a 'davenport' too, here in the west Ohio. Hmmm.... my brother lives not too far from Davenport, I'll go on a mission....

Carol ~ LOL, we do joke about it still. It WAS funny! Hmm...I'm going to write about this one. Thanks!

Fr. S. ~ Your brother lives near Davenport IA? Really? Well, if at some point I go visit my relatives in Cedar Rapids, I'll wave at him on my way! :-) (Or is there a Davenport OH or KY?)

OK, just so we don't talk any more about davenports, here's the full story:

Thanks for the inspiration!

Did anybody esle's family call the T.V. listings the radio page?