MONDAY DIARY: ALMOST EXCRUCIATINGLY TRUE STORIES: YOU MAY NOT WANT TO READ THIS ONE

In the seminary we had some instructions on the special rules of being a Catholic gentleman as a priest - that is, things that pertain to us that tend to not be as relevant to the general Catholic gentleman.  One of the things we were taught is that priests should not smell.  That is, not just that a priest should bathe regularly but that he should not wear cologne or use products that produce an aura of scent around him.  A priest should smell neutral.  But we are constantly in situations that make this difficult - small rooms (especially confessionals) lots of heavy clothing, poor diets . . . It works against this principle.

A priest friend of mine tells the story of his Mom and Dad's first date and how it was almost a disaster.  His Dad, a young man at the time, was picking up his wife on their first date.  He pulled up, escorted her to the car, opened the door, and then as he was walking around the car to get into his side, he thought it a good time to pass gas.  Unfortunately he was wearing a big, long coat and it trapped everything inside until he sat in the car and his attempted sneak gas leak became apparent.

That happened to me in the confessional the other day.  Thinking I would take care of things before I went in, I was foiled when my cassock betrayed me by holding on to it like a giant balloon, the concealed silent release escaping though button holes etc, only after I sat down to hear confessions. 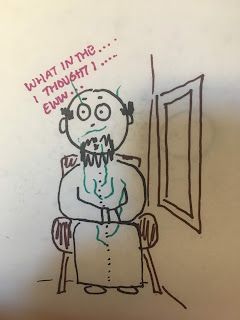 Two days ago, one of the dogs named after a famous English Catholic writer of the last century had an accident on the floor.  It was discovered when I stepped on it.  I cleaned it up, washed my shoe, and headed over to confessions.  I was both annoyed and confused when, after a few minutes, I still smelled the dog. 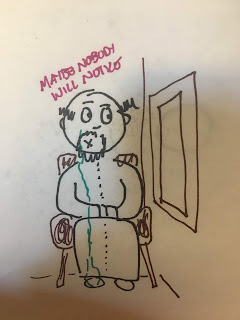 Between people coming in and out of the confessional I would search - Did I get it on my hands?  No.  My pant leg?  No.  After about three confessions I found the source.  I had stepped on the mess with my other shoe and it was all hidden up there behind the heal.  We were packed with confessions so what are you going to do?  Have everybody wait while I go change shoes?

Then there was the day - not too long ago - is this happening because I am over 50? - that confessions were slow.  It was almost the end of the hour and I hadn't had anybody in for 10 minutes.  I had been holding things back knowing the effect - but there were no footsteps, I hadn't heard the church doors open, no noises in church.  So I relaxed knowing that I would be leaving the box anyway in about 30 seconds . . . and just as I pressed by hands against the arms of the chairs to launch myself out of there . . . the door opens.  "Bless me father for . . . ewww." 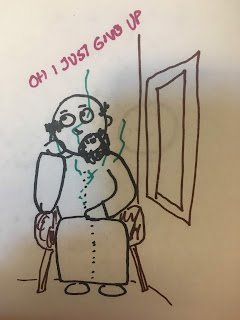 Seriously, this made me totally laugh out loud! Nice to know this, I think!!!! :-)

Well we are human beings after all....

I don't use the face to face side and now I have one more reason not to!