FRIDAY POTPOURRI: BUT IS IT ART?: NOW THAT'S INTERESTING 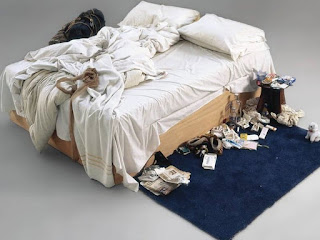 Furthering my distance from modern culture and making people upset, there is the problem of exactly what is meant by “art.”  For some people, almost any human effort - and sometimes happenstance - can be considered art.  Quite literally, putting an old shoe on a pedestal with a clever title, in some people's book, could not only be considered art, but high art.

I was swimming in Lake Erie and stubbed my toe.  Reaching down I brought out of the water a worn brick with tiny pebbles stuck in the holes.  It was interesting.  There was something oddly attractive about it.  My sister suggested that I keep it and put it on a shelf in the rectory which I did.  In some people’s opinion, this is art, or more specifically, “found art.” 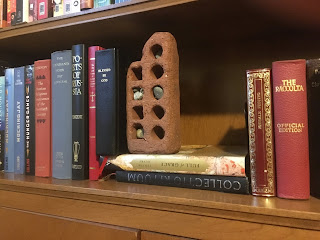 I can’t stretch out my definition (not given yet) of art that far.  That doesn’t mean that something like this should not be put on display.  There are things that are truly interesting, the definition of which is something that arouses curiosity.  It draws you to itself for some reason like that brick.  There are things in local museums that come nowhere near my definition of a combination of the concepts of Beautiful and Art but none-the-less deserve to be on display.

There is still such a thing as craftsmanship, ability and perfection.  A certain piece may inspire me with its human ability to pull something off.  Often (personally) I see such things as great ability being ready to be applied to art - or extreme talent applied to something ordinary.  Even if you do not see a piece as art, you can still appreciate the human endeavor.

Then there is the brick.  It is an oddity.  Human forces (some intentional and some carelessness) and nature combined to put something together that draws one’s attention - at least for a moment.  (Since I found it and recognized it, am I the artist?)  It might not bring more than a smile to your face or it might spark a project in your mind to create something like it.  But is that enough to consider it art or merely interesting? 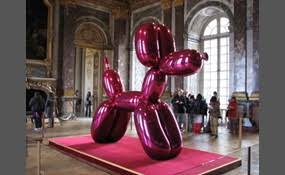 In this blogger’s humble opinion: it is worthy to put such things on display for interest and inspiration.  It curles my black oxfords however that it is classified as Art.  I wish there was another term such as “Interesting.”  But then, who would pay $25 to see the West Akron Museum of Interesting?
Posted by Fr. V at 7:09:00 AM

Father, I have been very entertained and interested in your is it art comments. Being an artist, I am constantly confronted with art that I have a "problem" with. I try to use God's gift to create something HE would be proud of, and, therefore, try to create something aesthetically "worthy" or "beautiful". But I always am in the presence of fellow artists who create truly ugly or gross manifestations of their "feelings" or "inspirations". A real quandary. Thanks for clarifying all of this for me. I don't feel quite so guilty now for saying outright (even if to myself) that "I don't like this piece of "art".

I would note that we already have a word for interesting items that do not rise to the level of art: curios.