FRIDAY POTPOURRI: BUT IS IT ART?: OR IS IT PRETTY ATTRACTIVE? 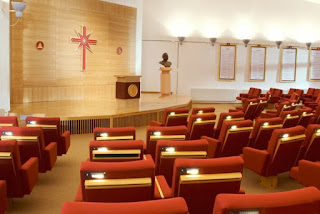 Living at a parish once, I would often run into visitors who would come in and say, “This is a beautiful building!”  The first thought that would pop into my mind was, “Really?”  It was not what I would consider a beautiful building but would thank the person and try to find out why they were drawn to it.

Like the word “love,” the word “beautiful” is also over used.  It seems to have become a synonym for others words such as “pretty” or “attractive.”  Something can be attractive without being beautiful  (I realize that this is being said without beautiful yet being defined.)  I think many people found the building mentioned above attractive but were moved to say beautiful.  The building was spacious, comforting, clean, functional, colorful and comfortable.  In this way it was also very attractive - it drew your attention.  Even after a lot of time had been spent in the building, one could still feel very much “at home” in the building.  But, I would argue, the building itself was not beautiful.  It did not continue to inspire a person to observe it and where it was attempting to lead you.  It did not, of itself, inspire a person to go out and see beauty in the world or to create something beautiful from its inspiration.  In fact, it somewhat fell into the background.  It was an attractive and functional building, it was not a work of art.  Nobody would ever take a bus trip there to see the building.  Ever. 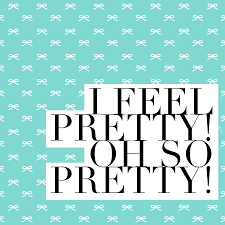 “Pretty” works much the same way.  The pretty object too is pleasing to (many/most) human beings, but something about it falls short of beautiful.  The colors may be pleasing to the eye, it may bring a smile to your face, it may be clever, pull at the heartstrings but seldom (if ever) has any deep meaning.  A typical little girl’s bedroom might be pretty.  A painting that matches the couch might be pretty.  A Christmas tree might be pretty, but is it necessarily beautiful or art?

Not that there is necessarily anything wrong with attractiveness or prettiness.  In the right context they are exactly what we need.  At other times they are distasteful.  When a person wants that which is beautiful, to be confronted with the merely attractive or pretty (or interesting) is mightily disappointing.  That is the inner urge in you to say (and you are polite enough not to blurt it out) “I could have done that!”  This is confronting the lack of inspiration, the lack of being drawn in, the lack of being transformed, the lack of being moved to create beauty in the world for having been exposed to the beautiful. 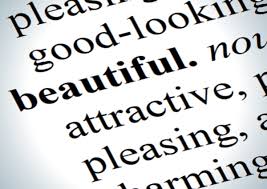 Of course, this assumes art and beauty are connected which, you may have well guessed, I do, though I have not really defined much yet except via the negative.  I also know my former art teachers are turning in their symbolic graves but there you go.
Posted by Fr. V at 7:22:00 AM

I never thought you could actually "overuse" the word love .....

Well - in this way. We say I love God and then there is love of a spouse (and even one's enemies) But it also said that people love cheese and the color purple and horror movies. But are all of these (at least in the Christian sense of the word) love? Sometimes it means that a person has a preference or is excepted about or has good feelings toward. When love (like the word art or beauty or, in our day even marriage) can mean just about anything, does it retain much meaning?

Of course one could argue context - but being a person who loves prose (while not being particularly talented at it) why not choose a better word that would be be more accurate? I don't love cheese, I really, really, really enjoy the taste of cheese.

As I tell Fr Simone, the beauty of tbis country is that you and I can agree to disagree! I LOVE that (AND the color purple)!! Peace Fr! ��

A slightly more classic definition of love is "willing the good of the other for the other's sake." Apply that definition of love to an object and you can see where it falls a little short, as in "I will the good of cheese for the cheese's sake". Objects don't really "receive" good, they already are good in and of themselves (God created them) and for the ends they can serve if put to good use. People, however, can certainly be the recipients of another person's good will. In loving another person, I will their good and hopefully in doing good toward them they receive our love as we intend. Cheese doesn't receive our love, it is simply consumed by our taste or appetite, and that is good--it serves a good end and satisfies our hunger--but it is not loved in the sense that people are. And just to push to another level, for example, when someone exclaims that we are to love creation or the planet, what is really being said is Christians have a moral obligation to care for the planet (which may look similar in ways that we love people but is still not the same thing).

Our care for creation and the planet is actually the means by which we put into action our love for our children, our neighbors, and ourselves, and those who will live on it in the future. We don't will the good of creation or the planet merely for creation or the planet's sake, but for the sake of those whose lives depend upon it. Thus, we care for creation in order to love the people who live within it. And, as a wonderful effect of our caring for the planet (and by analogy using all things appropriately in morally upright ways), we also have the intangible and inestimable privilege of enjoying its beauty in two ways--first, from what is seen, but also from the knowledge that we will have of being a good steward of God's created beauty. This second benefit enhances our experience of the first (unless perhaps we haven't been taking good care of creation like we should, in which case what we see when we see God's created beauty might stir our conscience to start taking better care of it so that others will also have a chance to delight in its beauty--assuming we really love other people as we say we do).

I certainly respect your and Fr V's view on the word love and how it's used. I think in today's world, there are many other issues we could be talking about! �� I don't have a degree in Theology or Philosophy. I'm just me who loves ...

Of all the issues in the world we could be talking about, I think love is the most essential. Understand love and all the issues in the world are seen in the clearest light. I never meant to suggest one needs to have a degree to learn more about love or to love (and I’m sorry if it came across that way). God loves you (and Fr. V and me) in ways you or I could not even imagine with all the knowledge in the world. And God loves our daily and simple attempts to love as best as we possibly can. In the beautiful designs of God’s Providence he has also provided us all with teachers at different stages of life in order that we might better comprehend the wisdom of his love and grow in our own ability to experience it and, more importantly, to share it. By learning more and sharing what we have learned (which I presume is partly why we visit an entertaining yet educational blog like this), we honor our teachers and the God whose wisdom it is they have helped to impart to us. Please keep contributing at whatever level you can. God loves you for it (and so do I).

Touche' Fr! Thank you! Hope you're doing well with your studies in Rome! We miss you here at St. Sebastian!