MONDAY DIARY: ALMOST EXCRUCIATINGLY TRUE STORIES: JUST WHEN YOU THOUGHT EVERYTHING WAS UNDER CONTROL

Let me begin by saying that I think Amber Alerts are, in general, a good thing.  This is that incredibly loud and obnoxious noise that your phone makes when you receive a notification of an emergency in which officials want the community's help.  Usually it is a look out for a car, almost always foreign made, almost always white and with uninteresting license plates.  It's never AWSUM DVR or anything memorable.

I can't think of a good time for an Amber Alert to happen.  They have shot me out of bed yelling, "I AWAKE!  HEAD FOR SHELTER!" or scare the bejeebers out of me driving.

I've learned a number of things about Amber Alerts and phones recently.  Last Friday as a matter of fact.  For example, did you know that even if you have your sounds turned off on your phone that it may still go off full tilt on Amber Alarm?  Further, not everybody receives an Amber Alert at the exact same time?  And finally, have you ever wondered what would happen if an Amber Alert were to happen at the worst possible time with a very large group of people?  I no longer do. 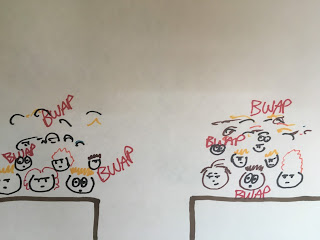 It was at confirmation Mass with our brand new bishop that I discovered all of these things.  It was during his homily.  At first it was a just a couple of phones and I was mildly annoyed that someone could be so rude as to not have turned off their phone at Mass.  I thought we were beyond that by now.  But after a few moments, it became evident it was a lot of phones and all making that same horrible sound.  You could see mortified people diving into their purses and pockets trying to extinguish the alarms in their pants.

It was so bizarre.  Slowly the alarms went off across the congregation.  It was like the final scene in The King's Men where, at the gathering inside the mountain, one by one the guests heads were blowing up.  Then there was the panic of the priests in the sanctuary: 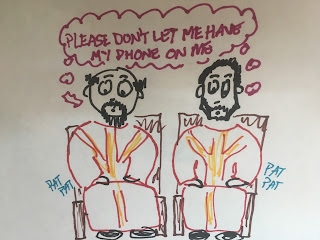 My husband was with the K of C honor guard at the Confirmation Mass, and to support our excellent boys from St. Bernard, Nick and Simon, (both altar servers who keep busy at our parish and the community, serving Jesus with dignity and joy), who were being confirmed along with your children from St. Seb's. He said the Amber Alert was awful. Fred *always* has his phone on vibrate whenever he enters any church, but, as you said, that was no help since the AA overrides and creates a loud screech.

In spite of it all, he said the Mass was absolutely splendid, and the K of C and our people from St. B were very grateful for the welcome you all showed to your visitors. What a special night for our boys! I am sure they will never forget it.

Fred said it was a real pleasure to meet Bishop Perez, who seemed to be delighted to be there in spite of the unexpected commotion. Not sure if he is a K of C man, but he was very gracious and appreciative of their presence, which was very encouraging to them (believe it or not, they aren't always welcome at some parishes or with some priests.)

Thank you and Fr. Simone for treating everyone from outside your parish so hospitably, and God bless and protect everyone at St. Seb's. - Sue, ofs