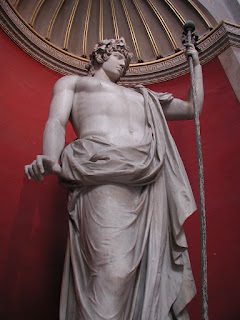 In the dome of our nation’s capital is a painting entitled, “The Apotheosis of Washington.”  You can read more about it HERE.  This is the Wikipedia description of it:  “The Apotheosis of Washington depicts George Washington sitting amongst the heavens in an exalted manner, or in literal terms, ascending and becoming a god (apotheosis).”  There is a tendency somewhere in man that makes us want to make our great ones god-like.  Think of movie stars.  Think of the Beetles coming to America.  Think of Super Bowl winners.

This was even more literal for pre-Christian rulers.  The emperor was not like a god, he was a god and demanding of worship.  That is how he kept his rule and his people in check.

Then comes along Jesus from some back water town with a unique message: the emperors, kings, supreme rulers?  They are not gods.  They are men.  God is God and these men are just as much under the same rule of the Heavenly Father as the lowliest of their enemies.  They do not have the right to do as their will pleases any more than you do.  Their “powers” (if you will) are held in check by the One True God Who is the true ruler over all the earth. 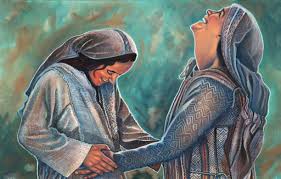 At the same time Jesus was saying this, He was saying other radical things such as, feed the hungry, give drink to the thirsty, visit the lonely, care for the sick, welcome the stranger, for when you do these things, you do them for me.

What is amazing about this?  It is just this:  While there are a few ways this line can be interpreted, I think one of the most amazing interpretations of this particular line from Mary’s Magnificat is so incredibly powerful because it is literally literal.  (HA!)  Bearing in mind what said above, how cool is it to say, “You have cast down the mighty from their thrones, and have lifted up the lowly.”
Posted by Fr. V at 7:44:00 AM