Much of the first two paragraphs were taken from the Our Lady of the Elms website.

OUR LADY OF THE ELMS 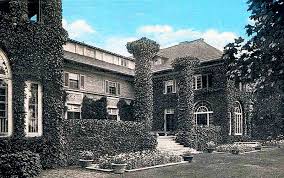 Our Lady of the Elms was founded by the Akron Dominicans in 1923, five years before the founding of St. Sebastian Parish, having their first day of school on October 15, 1923. To get to this momentous day, a score of Sisters of St. Dominic from the Dominican Province of Caldwell, New Jersey, led by Mother General Avelline Quinn, OP, purchased Elm Court, the beautiful mansion, grounds and buildings on West Market Street.

They saw beyond its beauty as a piece of property. They envisioned it as their center of operations in Akron, Ohio. Here there would be a Dominican Novitiate to form young women into Sisters of St. Dominic who would join their ranks and share in their work. They also opened a new school for young women where the Dominican vocation of teaching the young could be accomplished through the particular charism of Dominican education. A little band of Sisters of St. Dominic led by Mother Beda, newly-appointed leader of the new Cleveland Diocese Dominican Motherhouse, in just a few months in 1923, transformed Elm Court into Our Lady of the Elms, a convent and a day school. Classes for the first thirteen students were held in the convent building. 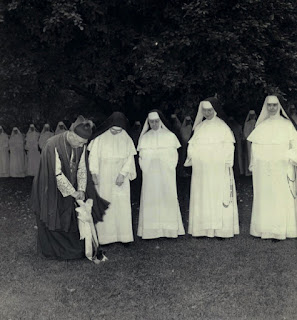 The school clearly proceeded the opening of the St. Sebastian Primary school and as such competed for students.  From the outset, there was tension between the two institutions.  Numerous letter were written back and forth to the bishop asking him to intervene between them.    In a letter to the Right Reverend Monsignor McFadden dated March 14, 1931, Mother Beda O. P. writes, in obvious response to accusations made by Father Zwisler:

“He insists that Sister Jeanette, the principal, has frequently proclaimed the priority rights that would seem to indicate that he had no right to establish a parish school.

“In November, having heard rumors of Father’s public attacks on private select schools, Sister Jeannette and I went over to his rectory to visit him.  When we asked him what was the trouble, he answered that there was no trouble but we had believed women’s gossip, etc.  However, during the course of the conversation, Father maintained that private grade schools should not exist anywhere in the country where the nation is dotted with parochial schools. 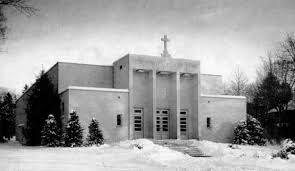 “We answered that this property had been purchased, with the permission of the Rt. Rev. Bishop, to open a novitiate to supply teachers for this diocese.  In order to support this novitiate, since we are only a teaching community, we had to open a school.  Then Sister Jeannette, turning, remarked, so we have priority of existence.  Evidently Father Zwisler has interpolated her remark, as Sister neither insinuated nor said that ‘he had no right to establish a parish school.’”

But that is not to say that the relationship was entirely competitive.  According to the same letter, when Father Zwisler first came to Akron the children of the Elms put on a program for him to celebrate the tenth anniversary of Armistice Day.  Father and especially his parochial vicar said Masses, instructed children, heard confessions, and even had entire classes spend a week at St. Sebastian School when preparing for First Communion, a forerunner of our current “Jesus Day.”
Posted by Fr. V at 5:41:00 AM